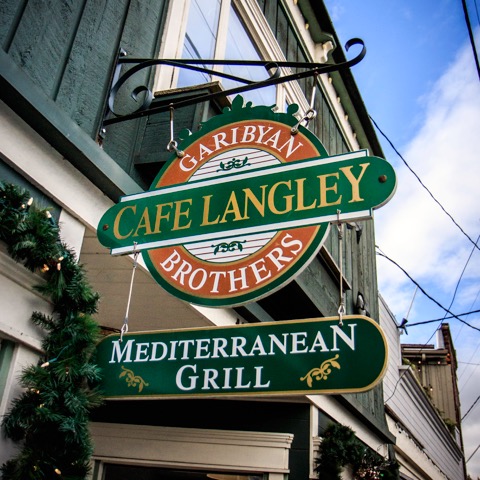 Saying Goodbye to a Langley Legacy

Cafe Langley served its last dinners on Friday Dec. 23, ending an era of a beloved restaurant owned by the brothers Garibyan.

Shant and Archie Garibyan opened Cafe Langley a little over 27 years ago and introduced islanders and visitors to Mediterranean fare — even though they were told that a regular “meat and potatoes” place was what everyone in town wanted.

“They told us no one eats lamb here,” recalls Archie Garibyan of the first months the cafe was open and the brothers served up a menu of lamb and chicken kabobs, hummus, dolmas, and spanakopita.

One of the classic city images is of Cafe Langley diners seated inside the glowing windows, looking out at the water, toasting each other, enjoying island fare such as crab cakes and Penn Cove mussels, which the Garibyan brothers featured in a variety of dishes.

The Armenian brothers left Istanbul when they were in their late teens and moved to California during the 1970s, where they worked for a cousin in the Los Angeles area in the waste management business. There, they met members of the Karamanyan family, whose brother Zaven had an upholstery business in Langley.

“They came numerous times to visit,” says Karamanyan, of Karaman Custom Furniture. “Archie told me he’d buy property here if they had the money, and later they did.”

The brothers saved their money and bought a barber/beauty shop on First Street, next to the Star Store, in 1988, and by the following year had turned it into a restaurant that coincided with the opening of the Inn at Langley down the street. Despite the naysayers who doubted such exotic food as Armenian-influenced Mediterranean fare would appeal to the public, the public flocked to the new restaurant and the brothers were up until the wee hours cleaning up and getting ready for the next day’s business. Through prosperity and lean times alike, the restaurant stayed open for nearly three decades. Last week, members of the community showed up to enjoy good meals and to reminisce.

Archie’s daughter Katya, who has been running the restaurant on her own with a skeleton crew for the past few months, says she had to buy more lamb to serve all the regular diners wanting Cafe Langley’s delicious lamb chops and lamb kabobs one last time.

Katya and her father Archie Garibyan during the last few days before Cafe Langley closed. (Photo by David Welton)

“People are coming in and sharing their memories,” a busy, but still gracious, Katya says, taking a brief break to talk in between lunch and dinner guests last week. “It’s been chaos this week, but I love it. It’s been a fun run.”

Katya has worked with her father and uncle for years, starting out bussing tables and waitressing and recently learning how to cook and learning how to manage the small family business.

Shant’s wife Carrie says that Whidbey Island reminded her late husband of the Princes’ Islands, off the coast of Istanbul, where his family used to vacation. The brothers’ family owned an Armenian deli in the Istanbul area, which planted the seed for her husband and brother-in-law’s future restaurant.

The Garibyan deli in Istanbul. (Photo courtesy of the Garibyan family)

Like her cousin Katya, Amara (Shant and Carrie’s daughter), says she’s been a part of the restaurant for as long as she can remember.

“I helped my dad with lots of chores and did odd jobs,” Amara says. “I rolled coins. Later I helped with bussing and hostessing. My favorite dish was pasta with onion, tomatoes, and chicken. Our comfort food. ”

Long-time friends and Langley residents, Frank and Janet Ploof were early and regular visitors to Cafe Langley. Archie says that before one of the couple’s visits to Turkey, they asked what souvenir they should bring back.

“I told them to bring me a Turkish chef,” Archie says. “They talked a man into leaving his job as a hotel chef, and he ended up working for us for four years.  He developed a huge menu, with seven to eight specials a day.”

Later, the brothers Garibyan hired Pat Powers as the main chef. She has worked with them for the past twenty years and oversaw final preparation of meals last Friday night.

“Much of our staff are like family to us,” Archie says, recalling that children of their original employees worked at the restaurant over the years.

The brothers often gave young people a leg up in the working world as well. One such young woman was Cherese Taggart, whose first job was at Cafe Langley about a decade ago. She later became a professional chef, worked on cruise ships, earned her boat captain’s license, traveled the world, and now lives in Portland.

“It was my first real job,” Taggart says. “I started out washing dishes, but they noticed my eagerness to learn and soon taught me the salad station and everything else I wanted to know. Pat was especially helpful and encouraging.  I spent just shy of three years there. It was a great place to start and learn about the restaurant industry.”

On a rainy Friday night, Cafe Langley was brightly lit and smelled deliciously of savory food. The atmosphere was festive, with friends dining on delicious fare and drinking wine.

“For Simon and me, Cafe Langley has always been a trusted go-to place,” Heath says. “Brothers Shant and Archie created one of those cozy cafes where we never doubted that we’d enjoy delicious food and wine, exchange a fun chat with friendly and familiar staff, feel the warmth of its seaside ambiance, and be confident that we were getting good value. For that reason, we never hesitated recommending Cafe Langley to our guests. And we especially loved those nights when the two of us would be lucky enough to sit in the front window. We’d watch friends walk by, feeling like we had front row seats in the charming life of Langley. For all these reasons, we shall dearly miss Cafe Langley and thank them for all these years.”

On the night of the “Last Supper,” as some of the diners called it, Cafe Langley was packed with well-wishers. Fred and Sharon Lundahl of Music for the Eyes sat at a table with friends. After dinner, Fred brought his harmonica out and walked over to a table where Archie sat with Katya. Fred asked the crowd to join him in singing “Auld Lang Syne” and “For He’s a Jolly Good Fellow.” Diners raised their glasses and sang. Katya and Archie wiped tears from their eyes, but the feeling was festive and upbeat and poignant.

This week, the family hosts an estate sale at the restaurant. While some of the beautiful pieces of furniture and restaurant signs were purchased by friends wanting to keep a piece of history, there are other items for sale Dec. 28 and 29. For more information, visit their website.