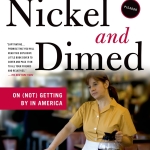 Season tickets are on sale for OutCast Productions 2015 theater season. Get them at Brown Paper Tickets.

The season kicks off with “Nickel and Dimed” by Joan Holden, based on the non-fiction book “Nickel and Dimed: On (Not) Getting by in America” by Barbara Ehrenreich. The show will be directed by K. Sandy O’Brien and opens March 6. Here’s a break-down of the entire season which runs from March to October.

Can a middle-aged, middle-class woman survive when she suddenly has to make beds all day in a hotel and live on $7 an hour? Maybe.

But one $7-an-hour job won’t pay the rent: she’ll have to do back-to-back shifts, as a chambermaid and a waitress. This isn’t the first surprise for acclaimed author Barbara, who set out to research low-wage life firsthand, confident she was prepared for the worst.

Barbara Ehrenreich’s best-seller about her odyssey is vivid and witty, yet always deeply sobering. Joan Holden’s stage adaptation is a focused, comic epic shadowed with tragedy.

Barbara is prepared for hard work but not, at 55, for double shifts and nonstop aches and pains; for having to share tiny rooms, live on fast food because she has no place to cook, beg from food pantries, gulp handfuls of Ibuprofen because she can’t afford a doctor; for failing, after all that, to make ends meet; or for constantly having to swallow humiliation.

Adjacent to the doctor’s laboratory, his young and energetic wife tries to tend to their newborn daughter—and wonders exactly what is going on in the next room. When a new “hysterical” patient and her husband bring a wet nurse and their own complicated relationship into the doctor’s home, Dr. and Mrs. Givings must examine the nature of their own marriage, and what it truly means to love someone.

With echoes of Stoppard, Kafka and the Brothers Grimm, “The Pillowman” centers on a writer in an unnamed totalitarian state who is being interrogated about the gruesome content of his short stories and their similarities to a series of child murders. The result is an urgent work of theatrical bravura and an unflinching examination of the very nature and purpose of art.

“Looped” tells the story of internationally celebrated actress Tallulah Bankhead as she is called into a sound studio in 1965 to re-record (or “loop”) one line of dialogue for what would be her last film, the dreadful “Die, Die My Darling.” Southern, but by no means a belle, Bankhead was known for her wild partying and convention-defying exploits that outshone even today’s celebrity bad girls. Given her inebriated state (and inability to loop the line perfectly), what ensues is a hilarious showdown between an uptight and conservative sound editor, Danny Miller, and the outrageous star.

OutCast performs all its shows at the Whidbey Island Fairgrounds’ Black Box Theater, 819 Camano Ave. in Langley For more information about OutCast and its upcoming season, visit www.outcastproductions.net.