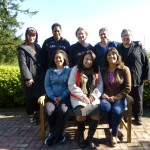 This May, playwrights Mia Chung, Alexa Junge, Evangeline Ordaz and Tracey Scott Wilson will join dramaturgs Anita Montgomery, Tanya Palmer and Christine Sumption for a two-week residency at the famed Whidbey Island writers’ retreat, capped off with public presentations of excerpts from the playwrights’ latest works.

The Whidbey Island reading of the 2014 Hedgebrook Women Playwrights Festival takes place at 4 p.m. on Sunday, May 18 at Whidbey Island Center for the Arts in Langley. This events will include readings of excerpts from each writer’s latest play and an opportunity to talk with the playwrights, their dramaturgs and Hedgebrook’s Executive Director, Amy Wheeler. There is a $5 charge for the event at WICA that can be waived by request by emailing katiew@hedgebrook.org.

Playwrights taking part in the 2014 Hedgebrook Women Playwrights Festival represent a wide variety of theatrical styles and dramatic voices. Mia Chung is working on “Skin in the Game,” a play that examines America’s core belief in fairness and the art and science of measuring success. Alexa Junge is writing a stage adaptation of Sarah Waters’ Victorian-inspired crime novel, “Fingersmith.” Evangeline Ordaz is working on “This Land,” which tells the story of one piece of land over 150 years. Tracey Scott Wilson is writing “Ugly,” a play about abortion and the decline of American feminism.

Participation in the Hedgebrook Women Playwrights Festival is by invitation in collaboration with partner theaters from around the country. In recognition of the fact that fewer than 20% of the plays produced each year on U.S. stages are written by women, Hedgebrook is partnering with theaters who show their commitment to women playwrights through commissions, development and production opportunities. In this way, Hedgebrook forges opportunities for women playwrights to deepen their relationships with theaters and is becoming a major pipeline for plays by women to move from creation to development and production. Current partners include Denver Theatre Center, Oregon Shakespeare Festival, Seattle’s ACT Theatre, Chicago’s Goodman Theatre and Center Theatre Group in Los Angeles.

Since the festival’s inauguration in 1998, the Hedgebrook Women Playwrights Festival has supported the work of an impressive array of women playwrights, including Quiara Alegría Hudes (“Water by the Spoonful”), Lynn Nottage (“Ruined”), Tanya Saracho (“The Tenth Muse”) and many others, and has served an important role in the development of new plays by women.

Use this Hedgebrook link: http://www.hedgebrook.org/page.php?pageid=242 to order tickets.