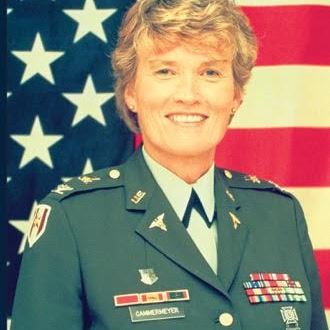 If you’re not sure how to commemorate Veterans Day this week, try reading a book, especially one that demonstrates that following your principles is often more productive than following your plans. One such book, originally published in 1995, has a new 2016 edition with added pictures and a new epilogue: “Serving In Silence” by Colonel Margarethe (Grethe) Cammermeyer, Ph.D., who lives in Langley.

This new edition covers related material between the first edition and Cammermeyer’s continued activism through 2016, including details about the movie made from the book (produced by Barbara Streisand with Glenn Close playing Cammermeyer). Among other awards and nominations, the movie received three Emmys and was nominated for three more; it also received the Peabody Award.

Streisand’s fascination with the book is based on its powerful story about human rights and personal growth. Cammermeyer—a Vietnam veteran, Bronze Star recipient, V.A. Nurse of the Year, mother of four, and the highest ranking officer to challenge anti-gay military policies—came to the United States from Norway after World War II. After having seen American soldiers liberating her country during that war, she cherished one idea: serving her new country. She wanted to prove herself.

“For me, being a soldier meant more than merely firing a gun or flying on a bombing raid,” she says. “Would I be woman enough, as the models I revered from childhood were, to do the hard job of fighting for coun­try and freedom? Would I be able to choose the greater good over personal safety? Would I stand up, regardless of the cost, for what was right?”

The answer to her question came in many ways during her 31 years in the military. Not only did she receive awards and commendations for her outstanding service—in the U.S., in Germany, and in Vietnam—she ultimately had to make an even greater sacrifice. She chose the greater good for all service personnel, fighting for equal opportunity for all, even though it resulted in her involuntary discharge. It was a huge personal blow to her, but one that opened up a new role as an activist.

Cammermeyer’s ordeal began when, during a routine investigation for top-secret clearance, she revealed that she was a lesbian. Her honesty unleashed years of investigations, court hearings, a discharge, and, after finally winning in court, reinstatement in the military with full honors. She remained honest, open, and determined to fight against the anti-gay policies of the U.S. military. She was still fighting when the last two barriers fell: the “don’t ask, don’t tell” policy and the Defense of Marriage Act. Both found unconstitutional, their demise allowed equal rights for all veterans to serve their country and for their spouses to receive benefits.

Following the demise of “don’t ask, don’t tell,” Cammermeyer was invited to lead the Pledge of Allegiance to a full house at the Interior Department on Dec. 22, 2010. The final enactment of the repeal was on Sept. 22, 2011. Cammermeyer sounds reverent when she says, “Finally, the flag that we had represented in uniform represented us all.”

Following the law making marriage available to all, Cammermeyer and her partner of 24 years, Diane Divelbess, were the first couple in line in Island County to obtain their marriage license on Dec. 6, 2012. “We were like kids waiting for tickets to a concert. We sat outside the County building on folding chairs, under blankets, until the office opened.” They were married three days later.

In spite of the challenges Cammermeyer has faced, she has never lost respect for her country or the people who fight for the values it represents, especially “liberty and justice for all.” She continues to commemorate Veterans Day in a number of ways. “Over the years, I’ve attended memorial events,” she says. “Two years ago, I was recognized by the University of Washington with their Distinguished Alumni Veteran Award; I was part of the many events the University includes in appreciation to the sacrifices of service members. Another year, I was invited to give the keynote at the 20th dedication of the Vietnam Women’s Memorial Commemoration. I have been part of the Coupeville parade in the past. At heart, though, we usually celebrate it quietly watching the music and pomp and ceremony around the event at the Arlington National Cemetery.”

Cammermeyer’s views on respecting one’s country by fighting for the freedom and equal rights for all individuals comes across clearly in her book. “I’ve learned that if I’m uncomfortable, it’s where I need to be. I will continue to speak out, and I hope you do, too.”

Editor’s note: You can or order the book through your local bookstore by its ISBN number, which is 978-0-692-77393-2. The book is also available in print, ebook, and audio book versions at Barnes & Noble, Amazon, and other online dealers. The older edition is still available, so be sure to get the latest one.

Marian Blue has spent 45 years as a journalist, creative writer, editor, and teacher of writing. Currently nestled in Whidbey Island woods, she is devoted to her family of fowl, goats, llama, dogs, parrots, and people, as well as writing.