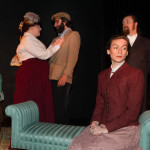 “In the Next Room” is a great script by an exciting modern American playwright; so don’t miss it. It all takes place in the dawn of the age of electricity, and after the Civil War; circa 1880s. The play focuses on the revelations sparked by the female orgasm.

Katie Woodzick and Michael Morgen rehearse a scene from “In the Next Room” at OutCast Productions. (photos by Doug Kolb)

Sabrina Daldry and Catherine Givings are sexually frustrated with their husbands, who creep quietly into their beds at night and only use the missionary position, which they endure, but do not enjoy. Both are excited to have their first orgasms with the machine. Mrs. Daldry is content to continue having clinical treatments with the machine and suffer lifeless, boring sex with her own husband. But Catherine Givings wants more.

Mrs. Givings learns from a visiting artist that orgasms detached from love ultimately are unfulfilling and empty, simply surface, without soul. Then a lower-class wet nurse, Elizabeth, reveals to Catherine that she may be able to enjoy the same sensations from the machine with her husband, with whom she is frustrated because of his clinical detachment, but still ultimately loves.

Director Ned Farley brings the play to life with cast members Ethan Berkley, Jennifer Bondelid, Phil Jordan, Kathryn Lynn Morgen, Michael Morgen, Hollie Swanson and Katie Woodzick in this hilarious comedy of manners, which was a finalist for the 2010 Pulitzer Prize for Drama and was nominated for the 2010 Tony Award for Best Play.

Tickets are $18 for adults and $14 for students and seniors. Get them at Brown Paper Tickets or reserve seats and pay at the door by cash or check by emailing us at ocp@whidbey.com.