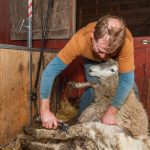 Posted in More Stories, What's up

When Welsh sheep farmer Eifion Morgan visited the Island County Fair in 2004 with his Whidbey-born wife, Jane Clyde, it was natural for him to make his way to the livestock area to mingle with island sheep farmers. They talked breeds, quality of fleece, and other matters of mutual interest. When it came to the subject of shearing, the talk turned to quantity; most farmers said they managed six sheep per hour. When asked how many sheep he could shear in an hour, Morgan cited a number most listeners assumed was an exaggeration: 20. To position a sheep and remove the fleece in three minutes seemed, well, unbelievable. And to do it without ceasing, one 175-pound animal after another, for a total of 20 an hour? Farfetched, surely.

That conversation gave Eifion (pronounced I-vee-on) Morgan something to ponder. Since visits to the island to see Clyde’s family were a yearly event, he knew he would be back in 2005 — and every year after. He decided to advertise his services to islanders via the internet, and folks began signing up. Soon, Morgan had confirmed a shearing schedule for his next visit. When he arrived on Whidbey Island in the spring of 2005, 167 sheep of various breeds — Southdown, Black Welsh Mountain, Icelandic, Shetland, Corriedale — awaited him. To general surprise and admiration, he made good on his word, shearing, on average, a sheep every three minutes, continuously.

The flock at Shauna Lundstrom’s 5LRanch in Oak Harbor contained in the holding pen. (Photo by jim carroll – jshuimages.com)

That bit of self-promotion was the first and last Morgan ever had to do. “From then on, it was all word of mouth. Sheep people here on the island talk and blog, so word spreads,” he says. “Farmers back home don’t blog; they just chat in the market.”

In 2006, during an extended, leisurely visit to the Clyde family, Morgan made unhurried visits to farms, deepening his knowledge of Whidbey farmers and shearing 400 sheep during his six-week stay. Increased demand for his services caused him to purchase miscellaneous supplies (hoof trimmers, wormers, inoculates), electric shears (mounted on a panel), portable metal railings (for an impromptu holding pen), and a pickup truck (kept parked at the Clyde family home). He’s logged considerable miles on that truck every spring since, regularly driving as far north as Linden, as far south as Elma, as far east as Carnation, as far west as Quilcene.

The right tool for the job: electric shears. (Photo by jim carroll – jshuimages.com)

Morgan’s clients consult him as they would a veterinarian. He’s also become somewhat of a sheep broker; he knows what his clients want to acquire, sell, trade. Many of his customers have become more than acquaintances. “They are loyal to me, and I’m loyal to them. They are genuine friends,” he said. “Some have visited Jane and me in Great Britain.”

As it has turned out, Jane Clyde’s trip to Wales in 1979 on a pony-trekking expedition, and her subsequent marriage to Morgan in 1981, was a stroke of luck, albeit several years deferred, for Pacific Northwest sheep farmers.

Although his shearing pace seems jaw-droppingly fast to island sheep farmers, it elicits shrugs in the Aber Valley, where Morgan and Clyde reside. Among Welsh sheep farmers, shearing is organized for efficiency. “Five shearers lined up in a row handle 4,000 sheep in three days while helpers remove the wool as fast as it comes off the animals. It’s an assembly line,” Morgan says.

Morgan is a pro at calming the ewe during shearing. (Photo by jim carroll – jshuimages.com)

When it comes to sheep, Morgan has observed other differences between Wales and Whidbey. There are more breeds on the island than is typical in Morgan’s part of the world. “In Wales, I deal mostly with Welsh Cross Cheviots,” he observes.

Morgan also finds that Whidbey Island sheep tend to be an older crowd. “Here, I’m shearing sheep that are 14 years old. They’ve become family pets. Back home, a sheep would be long gone by that age.”

That’s because Welsh farmers can’t afford to be sentimental about their animals; in order to make a viable living from a farm in Wales, it must support 800 to 1,000 sheep and at least 50 head of cattle. Morgan himself learned to shear sheep at the age of 13. It was expected in the same way that completing chores before going to school was expected.

A shorn ewe adjusts to the chilly air. (Photo by jim carroll – jshuimages.com)

Through his own training and 44 years of experience, Morgan has learned the qualities that make a good shearer: strength, endurance, patience, and confidence. “You have to be confident to push that blade through the wool without damaging the skin,” he says. Tolerance for mess and dirt are also high on the list. “You’re not going to want to wear the same clothes tomorrow that you sheared in today.”

Although the size of Morgan’s own flock has diminished from a one-time high of 400 breeding ewes, he derives additional income from the land in other ways. He makes and sells cider under the label Aber Valley Apple Juice. For several years, Jane managed a bed-and-breakfast based in the couple’s 400-year-old farmhouse located in Brecon Beacons National Park. The 60-acre farm, which belonged to Morgan’s father, is ideally situated in a landscape of escarpments and cirques, peaks and valleys carved out by glaciers.

The mother and child reunion. (Photo by jim carroll – jshuimages.com)

Although raising his own sheep is less of an occupation for Morgan these days, he knows his sheep statistics backward and forward. He keeps meticulous records in a small notebook: 80 clients this trip; 1,500 sheep sheared. He cites the record time clocked at The Golden Shears international competition: 40 seconds. His own personal best is 400 sheep sheared in a day, achieved several years before he reached his present age of 57. He looks forward to the day shearing is included in the Olympics. If and when it is, there’s no doubt who Whidbey’s sheep farmers will be betting on.

Separated from their mothers, lambs huddle together. (Photo by jim carroll – jshuimages.com)

Dianna MacLeod developed a fondness for sheep during her extended stays in rural Cornwall, where she observed the rhythms of sheep and farmers in the fields around her various rental cottages, sampled the many ways lamb is prepared, and attended numerous county fairs at which a variety of breeds were shown.