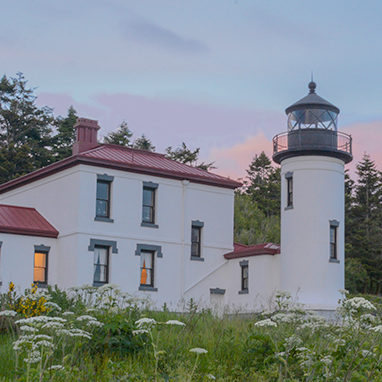 Shining a Light on the Past: Whidbey Island’s Fort Casey and Admiralty Head Lighthouse

This article was originally printed in Whidbey Life Magazine’s Spring/Summer 2015 print issue. Since it’s such a great time of year to wander through this beautiful setting, we wanted to give you a peek at the sights and a sense of the years of history you’ll discover.

It’s a balmy evening in early July at Fort Casey Historical State Park on Whidbey Island. Admiralty Head Lighthouse is lit by a pinkish glow, a hue that leads me to imagine the life of a lighthouse keeper—nights of vigilance, days with the sea as a constant companion. A short walk away is the gun battery at Fort Casey, the barracks at Camp Casey Conference Center and the Georgian Revival-style houses at Fort Casey Inn. Together, they conjure up sepia-toned scenes of officers’ wives preparing family meals, soldiers in artillery training and a radiant lens illuminating surly seas.

A ferry pulls into Keystone while a D.C. rifle points toward Admiralty Inlet.  (photo by Marsha Morgan)

This historic setting is a 35-minute drive from either end of Whidbey Island. Along the way, forests turn into farmlands, cliffs slope into beaches, and structures from another era dot grassy fields.

In front of the Lighthouse, I stand atop a concrete gun emplacement built into the top of a 100-foot cliff—at the start of my walk through a place and a time when Washington had yet to achieve statehood.

“Build ‘em stout, and make ‘em last,” was the motto of German lighthouse architect Carl Leick. His creation, Admiralty Head Lighthouse, has lasted for over 100 years and with good reason. The two-story residence and attached 30-foot tower was laid with 18-inch thick brick walls before being covered with white stucco. But this is no drab utilitarian building. Understated Victorian embellishments—peaked window frames and porch columns—add a touch of charm.

Docent Dick Malone steers me along the sidewalk in order to point out a spot at the southern tip of the Fort’s grassy ridgeline. “The original lighthouse was built in 1860 at Admiralty Head’s true geographic point,” he says. “In 1903, when construction was underway at Fort Casey, the Lighthouse was moved up here.”

Originally called Red Bluff Lighthouse, and notable as Washington Territory’s first wooden lighthouse, its stationary light could be seen for 16 miles. At the Lighthouse’s present location, 127 feet above sea level, its light could be seen for 17 miles out at sea. Converted into a museum in the 1970s, the Lighthouse serves as a reminder of the early days of navigation when the color scheme of such towers served as day markers and their light patterns as night signatures.

Once inside the lighthouse, I’m fascinated by pictures of the construction and completion of Admiralty Head Lighthouse. An informative display shows how the Oregon Donation Land Claim Act of 1850 brought settlers to the area who then claimed much of the Lower Skagit Tribe’s homelands. I get a close-up view of a Fourth Order fixed Fresnel lens and a Fourth Order rotating bull’s-eye Fresnel lens displayed in glass cases. Most of all, I’m eager to do the one thing everyone wants to do—walk up the black spiral staircase to the lantern house and revel in the 360-degree view.

From the top, Port Townsend is visible three miles to the west. Beyond that, the Olympic Mountains rise like humpbacked giants from the sea. Forty miles north is Victoria, Canada. The San Juan Islands are layered with fog.

At the turn of the century, the battleship was considered the ultimate weapon. It cruised at 20 knots, had a fully stocked armory and 12 inches of “belt armor” to protect it. This is what Fort Casey was built for—to defend against British and Canadian battleships entering Admiralty Inlet on their way to attack the Naval Shipyard in Bremerton. To this day, all ships heading south to Seattle or Bremerton follow this same route through the Strait of Juan De Fuca into Admiralty Inlet, cruising right past the Lighthouse and Fort.

To better understand the Fort’s artillery defense system, I join a free 45-minute battalion guided tour that takes place on weekends May through September. After we’ve all gathered at the kiosk next to the parking lot, Malone leads us up a small hill and pauses when Admiralty Inlet comes into view. “When was Fort Casey built?” he asks.

“Construction began in 1897, and forts like these took ten years to complete,” says Malone.

Fort Casey, as well as nearby Fort Worden and Fort Flagler, was part of a coastal defense system to protect access to Puget Sound. Upon completion, some 100 guns were in place to defend the areas’ waterways. At Fort Casey, the weaponry ranged from 3-inch rapid-fire guns to 10-inch D.C. rifles and 12-inch mortars. The original guns were salvaged for scrap metal, but in the 1960s two 10-inch D.C. rifles were shipped from the Philippines and installed. One bears battle scars from Japanese fire.

The highlight of the tour includes a visit to the “Powder Room,” which has four-foot thick walls. Malone explains how copper along the ceiling corners funneled water away from the gunpowder, protecting it from the “Pacific Northwet.” I notice the children’s enthusiasm at the demonstration of 617-pound shells being pulled up to the loading area above. Afterward, we follow our leader into the dark subterranean communication room known as the Switchboard. One girl is determined to see the ghost of a British soldier who is said to roam inside, but none of us encounter him on this particular day.

The defenses built into Fort Casey were state of the art for their time. But during WWI, advances in weaponry and the development of the newest weapon—the airplane—signaled a decline. During WWII, the Fort was used to train military personnel in amphibious landings.

After my tour concludes, the park quiets down. The only activity I hear over the surf comes from campers at Camp Casey Conference Center.

I check in for my stay at Fort Casey Inn to the sound of boisterous laughter coming from the adjoining parade field; young girls run after a soccer ball; boys take positions for their football game. I ask Patty Encinas, a customer service agent for Camp Casey and Fort Casey Inn, about the activity.

“During the spring and summer, we host a lot of camps and classes. In winter, we tend to host more church groups. We often sell out to weddings and family reunions during the weekends,” says Encinas.

Owned by Seattle Pacific University for over 60 years, Camp Casey Conference Center consists of 200 acres along the shoreline and includes 36 buildings, a private campground, picnic areas and a heated swimming pool.

As I gaze out over the complex with its sprawling green fields, various sleeping quarters, gymnasium, several classrooms and beach, I understand why so many educational groups, sports camps, music retreats, artistic workshops and reunions choose this breathtaking spot on Whidbey Island. It’s almost as if history created it just for them.

Relaxing on the porch of the “Doctor’s House” at Fort Casey Inn, I observe a lone deer wandering through the yard to graze. I see Crockett Lake, a natural bird sanctuary, in the distance, and appreciate a peace unbroken by blaring televisions and ringing cell phones.

In front of me, a row of Georgian Revival-style houses line up neatly beside each other with what seems like military precision. Each house includes a farm-style kitchen, covered front porch, spacious back porch, living area and gas fireplace. At the far end is Eagle’s Nest, a one-bedroom studio, and Garrison Hall, a large space for gatherings.

In 2001, Seattle Pacific University purchased Fort Casey Inn. “It’s a great spot for locals and travelers. We have a little bit of something for everyone—beach walkers, bikers,” says Encinas. “You can go into Coupeville to shop and eat.”

A local myself, I walk the beach and later dine in Coupeville. The slow pace of my visit gives me plenty of time to ponder the lives of those who lived here and to envision their day-to-day routines.

In the evening, I hike up to Admiralty Head Lighthouse and watch the sunset…perhaps following the same path walked by soldiers and lighthouse keepers more than a century ago. As the sun’s orange glow fades across Admiralty Inlet, I’m keenly aware that the history of this place hasn’t faded. Those who cherish it—docents, customer service agents, park employees—bring it to life for all of us, here and now, to experience.

Lara Dunning is a freelance writer. She has been published in The Crossing Guide, the Anacortes Scene and Waggoner’s Pacific Northwest Boating. Her interests include young adult novels, history, hiking and locavore inspired food.