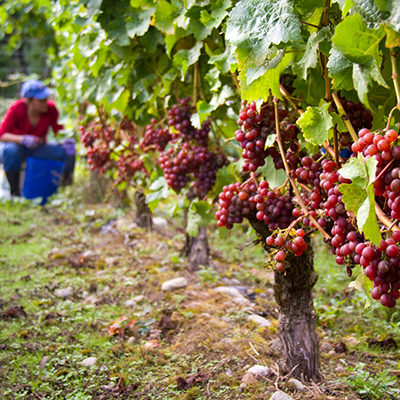 I used to think Gewürztraminer (guh–VERTS-truh-MEE-nur) was the hardest wine varietal to pronounce and spell (even the Microsoft Word Dictionary spells it incorrectly). For a long time it didn’t matter because I didn’t particularly enjoy drinking it, so being able to pronounce it wasn’t important to me.

Then one summer day in 1983, while heading to the Mendocino coast of California for a weekend getaway, I stopped at Navarro Vineyards in the Anderson Valley. It was on that visit that I learned how the taste of wine is affected by residual sugar. Unlike most Gewürztraminers I had tasted, Navarro produced a “dry” Gewurz with less than .4% residual sugar.

Wine with .4% to 1.2% residual sugar is generally considered medium dry, 1.2% to 4.5% is medium sweet and over 4.5% is considered sweet. Knowing the amount of residual sugar in a wine can help in identifying one’s preference regarding the level of dryness, particularly in white wines. While this is a simplified explanation for perceived sweetness, it is a good general guideline.

From that day in ’83, I’ve remembered how to pronounce Gewürztraminer. The dry style is now one of my go-to wines for picnics and pairing with smoked salmon or Asian cuisine.

Rita Comfort among the Siegerrebe vines (photo by David Welton)

Fast-forward 25 years and—to borrow from Yogi Berra—it was déjà vu all over again when I wandered into Whidbey Island Winery and was introduced to a relative of Gewurztraminer that’s even harder for me to spell and pronounce: Siegerrebe (zee-geh-RAY-buh).

Whidbey Island is fortunate to be home to two wineries that produce estate-grown Siegerrebe wines: Whidbey Island Winery and Comforts of Whidbey.

Siegerrebe originated in Germany. The delicate white wine produced from these grapes comes from a cross between Gewurztraminer and Madeleine Angevine grapes. In the early 1980s, Gerard Bentryn of Bainbridge Island Vineyard and Winery was the first winemaker to grow Siegerrebe in the United States.

Bentryn evangelized the laurels of Siegerrebe throughout Puget Sound. He shared cuttings with anyone he could convince to grow it. This included Greg Osenbach, co-owner and winemaker at Whidbey Island Winery who, in 1985, hauled cuttings from Bainbridge Island back to Whidbey on the roof of his Honda station wagon.

From those cuttings, Whidbey Island Winery planted the first vineyard of Siegerrebe on the island. Their first commercial release of the wine was in 1991. In a good harvest year they produce about 300 cases.

Similarly, Comforts of Whidbey has 1.5 acres of their vineyard dedicated to Siegerrebe, which yields 100–300 cases of wine depending on the year. Interestingly, Comforts’ 15-year-old vines were originally transplanted from cuttings that came from Whidbey Island Winery’s vineyard.

Comforts’ Siegerrebe nestled in the vines (photo by David Welton)

Rita Comfort, co-owner/winemaker at Comforts indicated that Siegerrebe is a cool climate grape that ripens earlier than most grapes. These factors contribute to making it a perfect varietal for the Puget Sound AVA. Osenbach said he feels that Siegerrebe thrives in the glacial till soil and the dry, long summer days of this region.

The climate on Whidbey allows the wine to exhibit complex aromas and flavors without being overpowering. It is these characteristics of the Siegerrebe wines produced here that   make them appealing to winery visitors once they try this unusual grape.

Both wineries produce their Siegerrebe in an off-dry (.65% to .7% residual sugar) style. The wines are also relatively low in both acidity and alcohol, so they’re perfect summer sippers, in addition to pairing nicely with spicy foods or the abundant shellfish available locally.

Research* indicates that consumers have a tendency to avoid ordering wines with names they can’t pronounce—whether in restaurants or when needing help in a store. Maybe it’s time for our local Siegerrebe producers to take a path similar to Robert Mondavi’s, when he rebranded “Sauvignon Blanc” as “Fume Blanc.”

*The research regarding wine pronunciation can be found at: https://faculty.fuqua.duke.edu/~rcm26/mcdevitt_et_al_embarrassment_march_2013.pdf