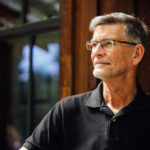 Charles “Charlie” Joseph Murphy Jr. passed away at the turn of midnight on August 6, 2016, after a brave journey with Bulbar ALS. Charlie, a Langley resident, is survived by his loving husband Eric, his parents Angela and Charlie, his siblings Diane, Mary, Betty, Paul and John, and his many nephews and nieces. He is pre-deceased by his youngest brother Steve. Charlie was held in the loving embrace of his beloved community on Whidbey Island, his wider family circle, and his many friends across the world.

Charlie was born on July 4, 1953, in Baltimore, Maryland. The third of seven children, he grew up as a happy child, who from an early age instigated much of the mischief in the household. Charlie’s mother Angela, a dedicated nurse, instilled a sense of service in her children, and his father, Charlie Sr., a hardworking court stenographer, encouraged them to pursue work that they loved and to reach for the stars. His family describes Charlie as very bright, funny, and curious. His engaging personality and outgoing manner made him popular among his peers. He was a member of the debate team, starred in school plays, served in student government, and won Catonsville, Maryland’s teenager of the year award.

Growing up during the civil rights and anti-war movements, Charlie decided as a teenager to devote his life to social change. His conviction was fueled by his experience at Camp Claggett, a summer camp led by a group of extraordinary adult activists who were also involved in the human potential movement. He worked as a camp counselor throughout his college years while studying sociology at Loyola University in Baltimore. He also received training in group facilitation at the Center for mid-Atlantic Trainers, where he became their youngest facilitator.

After college, Charlie chose to work with youth through the Roanoke Virginia mental health services. Charlie soon discovered, however, that he was being asked to help these young people to adjust to a world in turmoil rather than to empower them to take an active role in making things better. So, he left the world of mental health and chose to express his passion for social change through music. From an early age Charlie loved music and played the guitar. This unleashed a passion for writing and composing songs.

In the mid seventies, Charlie toured the country as a folk singer, inspiring audiences with a passion for social change. He was a pioneer of the men’s movement and sang openly about gay rights, making him one of the few out and proud gay singer/songwriters of his day. He appeared on the landmark 1979 album “Walls to Roses”, that featured both gay and straight men who supported the struggle against sexism. In the late ‘80s, Charlie founded the award-winning band, Rumors of the Big Wave, with creative partner and cellist Jami Sieber. His AIDS anthem, “I Choose Life”, landed the band a spot as featured artists on a Barbara Walters special commemorating the 20th anniversary of the AIDS crisis. Rumors of the Big Wave played with notable artists like Ziggy Marley, Ann and Nancy Wilson of Heart, and Midnight Oil. They traveled nationally and internationally and produced several award-winning albums. One of Charlie’s most well known songs, “Burning Times,” which the band played at the LGBT March on Washington in 1993, was beloved in the women’s movement and scaled the the Irish pop charts through a recording by Irish rocker, Christy Moore.

When he turned 40, Charlie became increasingly concerned about the challenges young people were facing in today’s world. He left his musical career intent on using the creative tools he had learned as a group facilitator, artist, and activist to help youth find meaning, purpose and joy in their lives. He took a job as Cultural Coordinator and then Training Director of the Earth Service Corps, a YMCA national youth environmental program which exposed him to the lives and challenges of youth throughout North America and several countries around the world.

In 1996, Charlie and Langley resident, Peggy Taylor, a journalist and creative development specialist, founded a creativity-based youth development organization called the Power of Hope: Youth Empowerment Through the Arts. Their Creative Community Model for integrating the arts into youth development, quickly caught fire and began to spark a transformation in youth work. In 2005, Charlie, was awarded an Ashoka Fellowship in recognition of his life-long achievements as a change maker and for his groundbreaking work in the youth development field.

In 2006, Charlie and his husband, theater-artist Eric Mulholland, began traveling internationally, leading Creative Community-based youth programs and trainings in Uganda, South Africa, Italy, and the UK. Three years later, with Peggy and UK-based entrepreneur Ian Watson, Charlie formed PYE Global: Partners for Youth Empowerment to further spread the international work. Charlie and Eric spent several years developing an international network of PYE partners and facilitators dedicated to bringing creativity and hope into the lives of young people. With over one million youth impacted to date and 30 partners in 15 countries, Charlie’s influence continues to grow and promises to flourish in years to come.

Charlie’s personal life was a rich tapestry of love and connection made of friends from around the world. The loving relationships he had within his home community on Whidbey Island, WA were among his most treasured. He was surrounded by love his entire life, and especially during his journey with ALS. In 2002 Charlie fulfilled a long-held dream of meeting the love of his life, Eric Mulholland. Charlie and Eric were married in 2006. They built a life of great joy, creativity and adventure, and have shared a deep and enduring love. Charlie’s relationship with Eric was his greatest source of joy.

Charlie Murphy was one of a kind: activist, musician, facilitator, teacher, mischief maker, good friend, and loving husband. He had an ability to inspire the best in people and to draw out a person’s hidden wholeness. People who were touched by Charlie’s charisma were forever changed. He was a lover of life, a magnetic leader, and a bringer of joy. Charlie loved a good time and throughout his life said, “people who do good work in the world throw the best parties”. And indeed, he was right. He will be missed, but his loving presence will forever abide in the hearts of all who knew him.

A celebration of Charlie’s life will be held at 6 p.m. Sept. 1 at the Whidbey Institute, Clinton, WA. Come by carpool and arrive early. In lieu of flowers, please consider a gift to the Charlie Murphy Legacy Fund at: www.pyeglobal.org.