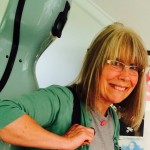 On one of our recent sunny days, I sped down the highway around the end of Penn Cove and saw many cars parked at the beach. I had seen a notice online for a “Digging for Dinner” class, a how-to on clam habitat, limits and licensing. I guessed that this was it, people learning about the rich shellfish bounty of our wonderful Puget Sound.

This made me think of Monstro.

Monstro was an ancient boat, 14-feet long, wooden, and a double-ended dory. It appeared one afternoon, towed behind our father’s car, down the dirt driveway of our summer cabin at the end of Holmes Harbor. I never knew where he got it.

What a surprise! It was enough that our father was here for a visit; usually he stayed in town to work. But here he was with a boat that you might see in a picture of a whaling village, and loaded on an equally odd trailer—also wooden, with tall tires that had spokes painted hunter green.

We girls were thrilled; my mother was silent. We named the boat Monstro and my dad announced we were going to use it to go clam digging.

My parents purchased their waterfront lot on Whidbey Island when I was nine and everywhere along the beach was evidence of a dying logging industry. Holmes Harbor was virtually unpopulated. The green clapboard machine shop that became Nichols boatyard was vacant, and across the street from it was a ramshackle wharf with a dilapidated storefront. Beyond the wharf, log skids extended out over the mud, like giant ribs of a dead animal picked clean by time. Underneath the skids, eight inches of sawdust covered the mudflats and, when the tide came in, the dark sawdust filled the waves.

Just off our beach, there was a behemoth of a raft, built on the scale of Paul Bunyan—huge-dimensioned lumber nailed with giant spikes. The loggers also built a tree swing in the huge maple tree by our cabin. The tree was so tall that there were no branches within 30 feet of the ground. A brave soul had scaled way up the tree and attached big wooden braces, stringing wire cable down the distance to the plank swing seat. The ground under the swing was sloped and if someone tall would give you a push, you would sail out over the whole world.

The loggers also left behind a giant picnic table in our yard. One evening during our first summer there, we sat at the table eating dinner and someone blew up the wharf and store and pieces of it landed in our dinner.

Our cabin was previously a tool shed and it was outfitted from St. Vincent de Paul’s. It had four sets of army bunk beds, two large, sturdy, leather-benched wooden chairs, (turned out they were original Stickley pieces!), three kerosene lamps, an orange-enameled après ski stove that Austin Powers would die for, a small picnic table and a chest of drawers. The cabin had no electricity but a huge Majestic wood cook stove with heating coils and a tall riveted hot water heater on an ornate steel stand. It provided hot water for scrubbing dishes but there was no shower. We didn’t care. We lived in our swimsuits and slept in sleeping bags that were full of sand.

Our cousins from Spokane were visiting us the day we went clam digging in Monstro. There must’ve been four to six kids along with my dad. I don’t remember any life jackets. The really little kids stayed at home with our moms. Our destination was a beach down around the corner, below what is now the Holmes Harbor Golf Club.

Monstro was moored to the big raft and to get out to it was tricky. Logistically, the tide had to be out to dig the clams, but “in” enough to load the boat. The long draw of the tide flat meant that, first, we walked knee-deep through the quicksand-like mud and next, forded thigh-high water with the clamming gear: a galvanized pail, shovel and coffee cans for bailing buckets. Our father carried the Seagull three-horse outboard above his head, someone had the gas can. It was raining.

We loaded in. My dad set the outboard in the engine well in the center of the boat and gave a yank; the engine sputtered to a start. I remember that it was a small noise, and secretly wondered if it was up to the task. My dad re-arranged us to get the boat balanced as Monstro moved slowly forward through riffled waves pitted with rain.

We kids dragged our hands overboard and stared down, looking for the drop-off. It’s 200 yards out from the end of Holmes Harbor, an eerie watery marker even for a Pisces like myself. Just before the drop off, the eelgrass waved dark and menacing and then there was the black void.

About then, my dad barked to start bailing. We looked into the bilge to see the water up to our ankles.

We bailed continuously until we reached our destination and nudged into the beach. My dad stepped out, shovel in hand and we scampered after him with the bucket. He dug, we sifted—nothing. We moved on and he dug again and this time we smelled the metallic smell of the gray oily sand that clams love. We sorted through the huge piles of wet muck and quickly filled the pail and loaded back into Monstro.

The wind came up as we headed back, a northerly coming from behind. It was colder now and we hunkered into the task of bailing, which kept us warm. My dad would sing. He knew just when to sing, to distract us from complaining or worry.

“One night as I was a trimming of the glim,
a singing a verse from the evening hymn.
A voice from starboard shouted ahoy,
and there was me mother a sittin’ on a buoy.
Yo-ho-ho, the wind blows free,
all for the life on the rolling sea.”

We reached the big logging raft and moored, leaving the bailing cans in the boat. The tide had come in and the water was deeper, but we managed to get back to the cabin. We were all cold and, inside the cabin, we wrapped ourselves in Army surplus blankets and our moms fed us lunch. They started frying bacon and cooking onions for the clam chowder and the top of the cook stove clanked as my mom loaded more wood. She and my aunt had baked a wild blackberry pie and there was a piecrust cinnamon roll for each of us after lunch.

I finished first, grabbed my warm piecrust cookie and beat it outside to the big swing. The sun was tentatively out, the grass still wet. I gave myself a push and floated over the big picnic table. I had a good view of Monstro tied up at the raft and, in the distance, the brown sawdust waves washed over the skids.

Soon the tide would be all the way in and it would be time to go swimming. I would find the biggest, whitest clamshell and play my favorite game. Throw the clamshell, swim as fast as I could under water with my eyes open and catch the clamshell before it hit the sand. Back and forth in front of the cabin; toss, dive, toss, dive.

And later, there would be a delicious dinner and some singing.

A Northwest native, Siri Bardarson is a writer with an emotional hotline to the vibrant natural beauty of Puget Sound. When not writing about the importance of the wild blackberry, daisies and natural time, she practices her cello a lot and sings at the same time. She loves her Whidbey Island home. Find out more about Siri at www.siribardarson.com.