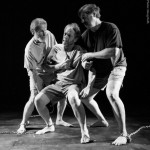 ‘Someone Who’ll Watch Over Me’ opens Friday, Sept. 19 at OutCast’s Black Box Theater in Langley

OutCast Productions delves into a play that couldn’t be more relevant to our time.

“Someone Who’ll Watch Over Me” opens Friday, Sept. 19 at the Whidbey Island Fairgrounds.

Considering the recent news headlines of the heinous cavalier beheadings of American reporters, James Foley and Steven Sotloff, by the Islamic State of Iraq (ISIS) and their countless other victims, it seems as if the play might have been written last week.

The play, written by award-winning Irish playwright Frank McGuinness, is inspired somewhat by the traumatic experience of Brian Keenan, who was captured in Beirut in 1986, along with John McCarthy and Terry Anderson, and held hostage for four years. It was first performed at the Hampstead Theatre, London in 1992, but as terrorism and hostage-taking seem to be regular occurrences in a world still ripe with psychopaths posing under symbol of god and country, the play is as prescient as it was 22 years ago.

Director K. Sandy O’Brien had been poised to direct the play years ago, but missed that chance, so she’s had plenty of time to think about it.

“The three characters of this story had always intrigued me,” O’Brien said. “To think this play is only about a hostage situation doesn’t do it justice. It does make you wonder if you put any three people in a room, could they work out their differences and survive if their captors let them.”

Jim Carroll, Tim O’Brien and Brian Plebanek in Frank McGuiness’ “Someone Who’ll Watch Over Me” (photo by Doug Kolb)

When the play was first produced, McGuinness spoke of an image of “three men chained to the wall, talking” and also about his obsession with the ongoing hostile relationship between England and Ireland. The play reveals all these kinds of wounds, while working toward an admittance of them, followed by a healing.

“Our finest human nature is what this play is about and the ability to rise above when put to the task,” O’Brien added.

“With different backgrounds and histories… can we be united? In this play we can. If only our captors would enter the room and join us there would be no play to be written.”

Tickets are on sale at Brown Paper Tickets or can be reserved by emailing OutCast at ocp@whidbey.com and paid for at the door by cash or check. Tickets cost is $18 for adults and $14 for students and seniors.

Visit the OutCast website for more information about this play and the upcoming 2015 season at www.outcastproductions.net.

Pictured at top: Tim O’Brien, Jim Carroll and Brian Plebanek in rehearsal for OutCast’s upcoming show, “Someone Who’ll Watch Over Me”  (photo by Doug Kolb)