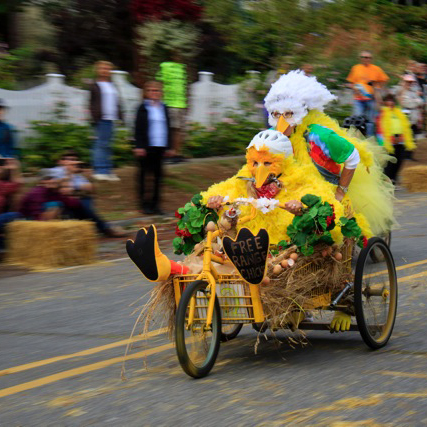 Soupbox Derby, 2015, Races to a Finish in Langley

The 2015 Soupbox Derby, held in Langley this last Sunday with the most entries in recent years, was a fitting memorial to Tucker Stevens, who is credited with reviving the event. The windstorm and rain retreated in time for the First Street Hill to dry sufficiently that it allowed a safe race for participants and spectators.

“Free Range Chicks” drivers, pit crew and Pam Schell holding candy corn chicken feed, could find nothing else to do while their book club was on summer hiatus.

Oldest racer Peter Lawlor (center) beats the crap out of Gary Piper (left—in his “outhouse”) prompting daughter Gretchen (in red) to run to congratulate him.

“Be Beautiful” from 2nd Street Hair Boutique caused the crowd to buzz.

Bob Bowling gets ready to launch the largest entry.

Carlos Harry tries to intimidate the competition with mean looks.

…rode in the back of the “Wren” car every time!