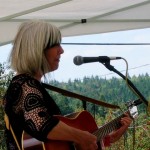 So there is this blue guitar; an old guitar recently and artfully painted blue, not worth much, and with an unknown history. But it has a year. This year.

2013 is the “Year of the Blue Guitar” at the South Whidbey Acoustic Music Festival (SWAM). This year’s festival begins at 11 a.m. on Sunday, June 30 at South Whidbey Tilth and will continue until at least 6 p.m. This will be the fourth edition of the annual event, an idea conceived during a conversation I had with Michael Seraphinoff on a lovely summer afternoon not long after I moved to Whidbey Island from Texas back in 2009. We were sitting on the beautiful grounds of the local Tilth’s Sustainability Campus, an 11-acre, grassy, tree-lined sweep that offers a fine pastoral panorama to the southeast.

Seraphinoff is a world class scholar, author, teacher and organic farmer, who has lived deep in the woods in a yurt for the past 30 years. You know, just your typical Whidbey Island dweller. He and his partner Susan Prescott were early members of the local Tilth chapter, a group that has advocated sustainable farming practices since the days when the word organic evoked something to do with body parts or mood music.

Seraphinoff told me how Tilth had come into possession of the property and he enumerated the ways people were using it. They had a community garden, a native plant restoration project, and the Tilth farmer’s market. (More recently, the Calyx Community Arts School for very young children has been holding classes in a converted booth at the site, as well.)

Then we talked about other, potential uses for the property.

Sarah Primrose and Russell Clepper of The Muse and Eye, play at South Whidbey Tilth. (“I Love Langley” photo)

Seraphinoff said, “We have always had this vision that this place could be a gathering spot for the community. A place for people to come and exchange ideas and information.”

From my perspective as a singer-songwriter, I often look at old bank buildings and abandoned storefronts as possible venues. A peaceful wooded field along a river, or a waterfall-graced hidden oasis in a Texas desert becomes a music-filled outdoor concert venue in my imagination. Seraphinoff’s comments stirred in me a thought about the Sustainability Campus that had already formed. It was a great spot for a music festival!

I floated the idea to Michael, who said it was exactly the sort of thing they would like to see happen there.

We held the first festival in 2010. Attendance was very low, but everyone who came to hear local musicians perform enjoyed it enough to let us know they hoped we would do it the following year. So we did.

Attendance has grown incrementally each year since; organically, you might say. As the concert promoter, I’ve had the good fortune to be helped by a number of people in the endeavor, including Sarah Primrose, Blaine England, Steve Showell and Karin Blaine, all of whom have also performed at the event.

In fact, Karin Blaine’s first performance there in 2011 remains a festival highlight; a watershed moment that sealed the deal for all of us who have been involved in promoting this happening. With her top-shelf songwriting and her ability to speak between songs to her audience in a personal, compelling and often humorous style, she created a profound moment of shared experience for us. Bingo! That’s what Seraphinoff and I had foreseen all those years before; community happening at the South Whidbey Tilth’s Sustainability Campus.

Blaine will be back this year, along with Trevor Reichman; and Showell and Joanne Rouse, with their daughter, Kendra. Rounding out the line-up are Quinn Fitzpatrick, England,  Joann Hamick Quintana, Liv and Gabby Barlow and their dad, Jeff Barlow, plus the Muse and Eye, (Primrose and me).

Reichman, who lives in the desert in West Texas, is the first non-local musician to perform at the festival. He also happens to be a grid-busting warrior for sustainability, organic farming and local economies. Reichman is a very fine songwriter and musician with a deceptively quiet stage presence, who is capable of creating the sort of moment that I’ve seen Blaine conjure.

Children are welcome to accompany parents and run free on the vast, green grounds. This year, Cordula Hetland will provide some felting activities for the kids, along with the added attraction of the Calyx school’s cob house in which kids are welcomed to play.

Russell Clepper is a singer-songwriter, who plies his trade locally and around the country. He also is a substitute teacher for the Oak Harbor School District.