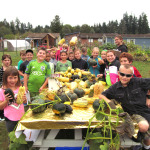 In October 2014, Goosefoot, a local non-profit community development organization, offered up a challenge grant of $15,000 from the Goose Community Grocer in support of the South Whidbey School District Garden Program.

The public is invited to join in a “big check” ceremony on Thursday, January 22, 4 pm at The Goose Grocer, where the donation will be given to the program. The Goose is located at 14485 SR 525 on South Whidbey Island.

The Goose Grocer is owned by Goosefoot. “The Goose is now in a position to give back and the school garden program appealed to us on many different levels,” says Sandra Whiting, Goosefoot’s executive director. “Goosefoot is currently researching way to support our local food system. Instilling an appreciation of fresh vegetables at an early age will have ripple effects for years to come.”

Fresh produce from the school gardens was first served in the cafeterias at the end of the last school year in May 2014. This school year, over 400 pounds of fresh veggies have already been served at lunch at all three schools—in the salad bar, as roasted vegetables, and in soup.

Funding from the three-year challenge grant cycle will allow for current and additional garden program staff to work with the school district in making the program self-sustainable. The gardens are used by faculty to teach science, math, and English…all in concert with the core curriculum.

For more information on the South Whidbey School District Garden Program, visit their website at https://whidbeyschoolgardens.wordpress.com/

To read more about this program in the WLM Feature “Big wHoop” by Dianna MacLeod, click here.

Goosefoot is a non-profit organization dedicated to preserving and enhancing the rural character of Whidbey Island through projects that support the local economy and promote learning and community. Their mission is to build a sense of place and community, preserve rural traditions, enhance local commerce, and help create a healthy, sustainable future for South Whidbey Island.