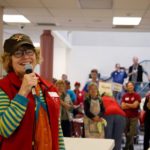 Saturday, May 7, dawned bright and clear for the 23rd Annual Hearts and Hammers workday.

Services and materials are donated or provided at cost. Red Cross representatives installed fire alarms and woodchuckers split aged treefall and then delivered firewood to many other homeowners not on the jobsite list. Curt Gordon of Island Asphalt & Sitework and his crew hauled tons of yard waste and discarded appliances to Island Disposal. Most importantly, but often overlooked and not talked about, were porta-potties provided by Gabelein Brothers Septic.  At the end of the day crews returned for a dinner prepared by local chefs and other volunteers with culinary skills, sharing their experiences and celebrating with music from the Open Circle Community Chorus.

It took a team of photographers to document all of these widespread activities. David Welton, his intern Emily Alexander and Marsha Morgan from Whidbey Life Magazine participated. Commercial photographers Jim Carroll and Kim Tinuviel have generously donated their images to Hearts and Hammers for promotional purposes. Hearts and Hammers board member Dyanne Sheldon photographed the northern most site, where she was a co-captain.

Below are a few selected photographs. Others will soon be posted at heartsandhammers.com.

Christine Epstein, “The Queen Bee” (as indicated on her hat), cheerfully greets and instructs the legion of attentive volunteers during breakfast at South Whidbey High School.  (Photo by David Welton)

Measure twice before cutting with the circular saw.  (Photo by Jim Carroll, jshuimages.com)

A cat anticipates a new deck to bask in the sun with a happy homeowner.  (Photo by Jim Carroll, jshuimages.com)

Sebo’s Do-It Center, Hanson’s Building Supply and Ace Hardware in Freeland were among the the many building material suppliers.  (Photo by Jim Carroll, jshuimages.com)

A lot of pine needles were cleared from the roof of a house in the forest.  (Photo by Marsha Morgan)

The best time to work on a roof is at first light.  (Photo by Emily Alexander)

An “Amazing Angel” upgrades the floor and plumbing in a log cabin laundry room.  (Photo by Emily Alexander)

People with specific experience and skills offer their time, as do people who offer what they can do with their hearts and hands. (Photo by Kim Tinuviel, kimtinuviel.com)

Nora Anderson plans to thank jobsite captain Clayton Granby and crew with a party for “giving her life back” after clearing her half-acre yard of aggressive blackberries and repairing her roof.  (Photo by David Welton)

Sunscreen, a floppy hat and a shady place to help are all this volunteer needs to be happy.  (Photo by David Welton)

“We had an amazing crew and a stupendous homeowner, Sheri Faucher,” said co-captain, Dyanne Sheldon. Three wheelchair ramps were updated and/or replaced and a new deck added, from which Faucher can look out over her new raised garden beds protected from grazing deer. “She’s SO happy!!” Sheldon added.  (Photo by Dyanne Sheldon)

All of the Kitchen Crew greeted workers with a smile. (Photo by Jim Carroll, jshuimages.com)

The Kitchen Crew whistled while they worked two shifts. They were led by Des Rock and Barton Cole.  (Photo by Jim Carroll, jshuimages.com)

Singers entertain the crew at the end of the day. (Photo by David Welton)