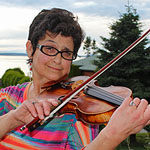 A talented violinist and seasoned teacher has joined Island Strings’ stable of Suzuki-method violin instructors on Whidbey Island. Susan Debnekoff moved to the island from California in May and brings an impressive resume of musical experience with her.

Debnekoff speaks very highly of the Suzuki method, which she has studied since 1990. She appreciates its positive philosophy and its goal of helping children develop into beautiful people.

“I think it’s much better than the traditional method,” she said.

“It’s a much more natural way of helping students develop good techniques. It doesn’t have the goal of producing professional violinists, but to help children learn by having fun.”

To illustrate how much she enjoys working with children Debnekoff said, “I enjoy teaching so much, I sometimes think I could do it without getting paid.”

Expect to eventually receive a bill for a violin lesson, however, because with her new home here on Whidbey, Debnekoff has bills of her own to pay.

Debnekoff is familiar with Whidbey Island. She has been coming here twice annually for the past 30 years to visit her parents, Lorraine and Basil Debnekoff.  She and her husband, lawyer and photographer John Evans, recently bought her parents’ large house at 300 Graymare Road near Greenbank and moved in with them. Debnekoff  is setting up her studio there.

Along with a Bachelor of Arts in music performance from the Peabody Institute of Music and an Masters in music rducation from California State University, Debnekoff offers many years of experience performing for various orchestras in Los Angeles and Monterey. She has performed with the Los Angeles Mozart Orchestra, the Monterey Philharmonic Orchestra and others. Debnekoff has also done studio work in the LA area for movies, television and records.