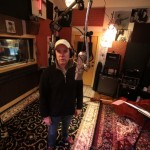 Sound Trap Studio record producer and photographer Robbie Cribbs captured the cast and band members of “Jacques Brel is Alive and Well and Living in Paris” as they recorded “Fifty Shades of Brel,” a CD being released in conjunction with the show. The musical revue opens Friday at OutCast’s Black Box Theater at the fairgrounds in Langley.

The CD features the band, Rhythmodique, and the cast under the direction of Scott Small, the show’s musical director and percussionist. The album was recorded live at Sound Trap in Langley, with no overdubs or studio magic; just the real sound of the instruments and voices.  Pick up “Fifty Shades of Brel” at the theater for $15 through the run of the show.

Sheila Weidendorf takes her turn at the mic with accordion . She plays the piano and accordion in the show, too. (Photos by Robbie Cribbs)

Ned Farley is one of the three singers in OutCast show, along with Katie Woodzick and Ken Martinez. Farley is also one of the founding members of OutCast Productions.

RIchard Hughes lends his stellar guitar licks to the proceedings for both album and show.

Percussionist Scott Small is the musical director and was lucky to have Neil Welch and his saxophone for the recording session.

Katie Woodzick steps up to the mic, while Jonathan Small plays the bass.

Jacques Brel was a Belgian singer-songwriter who composed and performed literate, thoughtful, and theatrical songs that generated a large, devoted following in Belgium and France, and then eventually, the world.

“Jacques Brel is Alive and Well and Living in Paris” is a musical revue based on the enormous effect Brel’s songs had on his audiences from the 1930s to the 1970s. The OutCast production opens Friday, July 19 at the Black Box Theater at the Whidbey Island Fairgrounds in Langley and runs through Aug. 3.

The show was conceived and written for English speaking audiences by Eric Blau and Mort Shuman, with Brel’s original music and French lyrics included. This production consists of 25 songs performed by, in this case, three vocalists, including Ned Farley, Ken Martinez and Katie Woodzick, and is directed by K. Sandy O’Brien with musical direction by Scott Small.

When “Jacques Brel” originally opened in 1968 in a Greenwich Village theater, French singer-songwriter Brel’s body of theatrically insightful ballads was already obscure. But his work influenced a spate of American musicians including artists as diverse as Leonard Cohen, David Bowie (who covered “Amsterdam”), and Frank Sinatra. Brel’s brooding, evocative songs about life, death, love and the consequences of human folly were unleashed on an unsuspecting and wide American audience. It could be said that “Jacques Brel” changed the course of Broadway theater through its popularity and the show’s deep effect on American audiences.

“Jacques Brel is Alive and Well and Living in Paris” has a live orchestra, which includes Richard Hughes (guitar/mandolin), Jonathan Small (bass), Small (percussion) and Sheila Weidendorf (piano/accordion). Woodzick is the vocal coach, O’Brien did the sets; Marlene Nakamura is the costume designer; Farley designed the lights; and Jeff Fisher is the sound designer.

General seating tickets are $14 for students/seniors and $18 for adults. Get tickets at Brown Paper Tickets (for credit card purchases) or tickets can be reserved directly with OutCast by email at ocp@whidbey.com. Reserved tickets can be picked up at the door and paid for by cash or check.

(Pictured at top, Ken Martinez lends his beautiful baritone to the session./Photos by Robbie Cribbs)