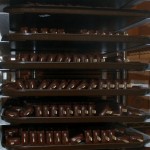 I scream, you scream.

Yes, we were all screaming for Whidbey Island Ice Cream during a recent, albeit brief, shutdown in production.  The standstill was not without purpose, however.  While people were craving chocolate dipped bars and pints of the creamy confection, the ice cream churning team of owners Ron and Florence Hecker was in the process of moving from cramped Langley quarters into a roomier facility located in Freeland at 1715 Main Street – one large enough to accommodate the snowballing demand for more and more of the sumptuous treat.

Ron Hecker took a break to talk about the move.

“Summer is our busiest season, so the timing was far from ideal,” he said.

“But when the new space became available, we couldn’t say no.”

Whidbey Island Ice Cream is distributed to an ever-expanding list of locations throughout Washington and Oregon.  Indeed, it is the only ice cream good enough to be served at the Westin Hotel in Seattle. The Renaissance Seattle Hotel also features the toffee chip and butterscotch flavors on its dessert menu. Whidbey Island Ice Cream owes its popularity to an uncompromising commitment to quality.

“All of our ice cream is hand-made in small batches with nothing but superior ingredients,” Hecker said.

“Lochmead Dairy in Oregon provides the rich 18 percent butterfat, hormone-free cream, as well as the mint we use.  Our berries are Skagit Valley grown, and the coffee is from Mukilteo Coffee Roasters in Langley,” he said.

“All of our lavender is grown by Lavender Wind Farm, and our peach ice cream uses only highly prized Pence Orchard peaches,” he added.

No more screaming is necessary.  Rest assured that the new Whidbey Island Ice Cream factory is cranking out more than enough ice cream for everyone.  Islanders can find their favorite flavors in most Whidbey stores and in select local restaurants, including at Whidbey Life Magazine member, Prima Bistro.

Food writer Susan Wenzel believes in the power of locally produced food to fortify the health and well-being of both the individual and the community as a whole.

(Pictured at top is a freezer full of Whidbey Island Ice Cream bars that await packaging and shipping to stores both on and off island.)