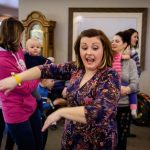 Spreading the Joy of Music in Oak Harbor

Inside a petite New Zealander is a whole lot of joy in music-making that she shares with other moms, their ukuleles, and the Oak Harbor community.

Mary Clarity, here in Oak Harbor with her Navy husband and family for a while, is from Hawks Bay in New Zealand. Her accented voice adds to the natural appeal and energy that flows easily into her friendly chatter and can-do-ness.

Mary Clarity and her daughter. Mary is the driving force behind the Ukuladies of Oak Harbor. (Photo by Kara Chappell)

On Mondays, she and a group of “Ukuladies” gather to practice music, get their kids together, and drink coffee.

We meet at Aisha Mayfield’s cozy home. Preschoolers run around playing with trucks. As we walk in, Mayfield announces that her mom’s scones are fresh from the oven and walks out of the kitchen with a plate of them. Buttery, flaky, warm. When Elizabeth Westfall walks in, Mayfield says, “You want your usual?” and Westfall does — a butter pecan iced coffee.

“This will change your life,” Westfall agrees, sipping her coffee.

“We’re all mums who enjoy getting together,” says Clarity. “It all began as a bit of a joke. You can’t get kicked out. We play our music for the joy of it. We throw cheese sticks and raisin boxes to the kids to keep them happy. We just started collecting songs, and now we’ve got a whole volume of them. There are creative people in our group and we naturally find the harmony.”

After coffee, scones, and greetings the ladies sit cross-legged on the floor, on couches, and chairs. They play “I’ll Fly Away,” and Mayfield’s dad Oliver joins in the singing while leaning against the kitchen doorway. Next, they sing Leonard Cohen’s “Hallelujah,” and the preschoolers who were playing come and sit with their moms.

Mayfield sings high harmony while playing her ukulele, which is etched with spirals for the word peace in different languages.

Playing ukulele together naturally creates friendships in this easy group and as a result, the ladies gather at Whidbey Island Coffee, the Roller Barn, and the Terrace Wine Bar and Bistro to play. “Every couple of months, we go to the wine bar and play and cackle and have the best interactions with the customers,” Clarity says.

Since she and her fellow Ukuladies have such a good time together, Clarity thought, why not make a video? “I get ideas, and they seem ridiculous and preposterous,” Clarity says. “My friend Amy Madson took the video.”

It’s called “Oak Harbor Love Song,” and is an ode to the whales, eagles, water, and friends having a good time, despite the fact that it takes a while to drive to Target and Costco.

Along with having fun, Clarity says, the goal of the Ukuladies is to teach parents to make music with their kids.

Jen Collins says that, although she went to college for vocal performance, after becoming a mom, she lost track of singing until joining the Ukuladies. The musical inspiration clicked, and she and Clarity collaborated to teach a parent and preschooler class, along with an intergenerational music class on Fridays at a retirement community in Oak Harbor called “Music Together.”

Jen Collins, a Ukuladies member, teaches an intergenerational class to share music with people of all ages. (Photo by David Welton)

Gathered around the fireplace last Friday were a dozen or so senior citizens waiting for the music to begin. They were soon joined by parents who walked in with their preschool children. Collins hosted the morning, playing her ukulele and singing good morning to the families and the gathered residents.

When the bell bracelets were brought out and the little people handed them to the seniors to join in, Telael Sibertang, a staff member at the retirement community said, “This is my favorite part. It gets the residents engaged.”

Children hand bell bracelets to residents, so they can participate in the music (Photo by David Welton)

Indeed. The singing and interaction with parents, toddlers and seniors was catching. After the bell song was over, Collins handed out colorful scarves and played a recording of “Twist and Shout.” Children and their parents danced with abandon and seniors raised their hands over their heads, grooving to the music.

Everyone sang to resident Linda du Brae to celebrate her birthday. “I love this,” she said.

At the end of each song, Collins sang about putting the instruments back in their boxes and baskets and gathered maracas, tambourines, and egg shakers for “When the Saints Go Marching In.” All were caught up in singing and playing and two residents sitting together on the couch tapped their maracas together in time to the music.

The 45 minutes passed quickly, and Collins ended the class by singing goodbye to everyone until the following week. A little boy named Oliver hugged her.

Resident Victoria “Tori” Hayden said she liked the music so much that she had to play some for herself and walked to the piano where she sat down and played some old tunes from her time.

“She reminds me of my grandma,” Collins said, watching Hayden play with abandon and certainty.

Another resident, Janice McCaffery, said she enjoys the visits each week. “Life gets away from us if we don’t take time to enjoy it,” she added.

Residents click maracas together during a Music Together intergenerational class created by Ukuladies Mary Clarity and Jen Collins. (Photo by David Welton)

Afterward, Collins said she uses songs from the seniors’ generation, 1940s songs, and some rock and roll thrown in when playing at the retirement community in Oak Harbor and at other senior centers in Anacortes.

“The residents are great,” she adds. “So many studies talk about the benefits of integrating preschool children and seniors. I grew up in the church, and have respect for the older generation. Mary is the epitome of a lovely free spirit, and I’m excited about what we do. You can do the Music Together curriculum for years and never repeat a song. It’s a wonderful world program.”