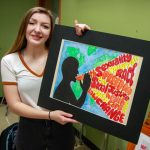 During Whidbey Earth and Ocean Month, students all over Whidbey Island were invited to participate in an art show. This year, young people chose social justice as their theme, and the resulting entries will be on display at the Bayview Cash Store from April 8 through May 29.

Sam Mirkovich is in his third year of teaching art classes at South Whidbey High School, following time spent teaching high school art in Croatia. He let students know about this year’s contest, and more than a dozen chose to enter, hoping to win prizes including $150 for the best overall piece. During “studio time,” when students work on their own pieces, they created art inspired by a spectrum of ideas ranging from the death penalty to unequal pay for women.

South Whidbey High School art teacher Sam Mirkovich has more than a dozen of his students participating in this year’s Climate Arts Project sponsored by Goosefoot. (Photo by David Welton)

Sophie Hamer, a sophomore, created a watercolor and pastel drawing depicting inequality in pay for women, who tend to earn 80 cents for every dollar men earn. “I am inspired by political things and wonder why women aren’t paid enough,” she said.

In her work for the show, Sophie Hamer focused on equal pay for women. (Photo by Sam Mirkovich)

Kyah Nelson, a sophomore, took the approach of featuring a silhouette of a man broadcasting social issues such as wealth, sexuality, race, and healthcare depicted on the background of a world map. “There are problems all over,” she said, adding that her inspiration for social justice comes from her grandpa, Jon Nelson, a former soldier who fought in Viet Nam.

Libby Hawkins, a junior, said her piece was based on the Pledge of Allegiance and its final phrase, “with liberty and justice for all,” which struck her as not equally practiced in our country. Her large piece contains the word “not” before words such as “blacks,” “LGBTQ,” “Muslims,” “immigrants,” “homeless,” “women,” “poor,” and “refugees.” “I got the idea for making this immediately after this year’s election,” she said.

Libby Hawkins’ piece illustrates that “with liberty and justice for all” still excludes many Americans. (Photo by David Welton)

Bethany Justus, a senior, drew a black-and-white portrait of Martin Luther King framed by his “I Have a Dream” speech. “His message is true and valuable today,” Justus said. “It has a positive ring to it.” Her inspiration is her English teacher, Miss Cave, who practices inclusivity with her students.

Bethany Justus remembers Martin Luther King’s ‘I Have a Dream’ speech in her work about human rights. (Photo by David Welton)

Alejandro Fredrickson, a sophomore, said transgender issues are important to him and created art depicting the prejudice of separate bathrooms for whites and people of color as compared to today, where transgender teens are singled out and segregated, much as blacks and whites were in the 1960s. “Trans rights are human rights,” he said.

Miki Lundy, a junior, made a piece featuring a woman’s face surrounded by harsh words, yet around her eyes and lips are words that she is loved. “The words outside are what people are calling her, yet inside she knows she is loved and worth more than she’ll ever know,” she says.

Miki Lundy illustrates the need to be strong in the face of bullying words. (Photo by David Welton)

Dakota Williams, a senior, painted a watercolor with the statement, “Illegal is not a noun,” illustrating her objection to calling people “illegal aliens.” “People need to be knowledgeable when they shout their opinions,” she said.

Dakota Williams’ piece is about taking the time to use words with integrity and thought. (Photo by David Welton)

Kareena DeClercq, a sophomore, said what is important to her is “What’s in your heart. I feel right now there’s a lot of discrimination against people, especially Muslims. Islam is a misunderstood religion.” In DeClercq’s piece, one face is illustrated with pupils depicting the Twin Towers and another with a brain depicting a nuclear war, both ways people from Muslim countries can be erroneously seen. At the bottom of the piece is a Muslim woman in a hijab surrounded by rainbows with a radiant heart.

Looking at Muslim people as humans with hearts instead of as terrorists is depicted in Kareena DeClercq’s art. (Photo by David Welton)

Lila Stach, a junior, drew an hourglass, with pieces of the earth trickling through over cities. “It is a slow trickle of what’s happening, pollution, water levels rising, global warming,” she said.

Time is running out for the earth if we don’t act, is student Lila Stach’s statement for social justice. (Photo by David Welton)

Carmen Warwick, a senior, chose human trafficking as the subject for her piece, “Not for Sale,” depicting a black and white drawing of a woman with a blank expression, conveying the numbness of the victim. “When I thought about social justice, this idea was brought to light in my head,” she said.

Carmen Warwick chose the subject of human trafficking for her art theme. (Photo by David Welton)

Anthony Murtha, a junior, drew a tree with a rope hanging from it. Death by hanging is still legal in this country and Murtha takes issue with the practice saying it is inhumane. His idea for the piece came from a family friend who was on death row in Texas and hanged.

Mary Zisette, a sophomore, drew on the adage, “The rich get richer and the poor get poorer,” and featured a tearful man holding a sign. “Our problems are getting worse,” she said. “Here on the island we’re really lucky that people can get help.”

Emmalee Norris, a freshman, looked at uneven pay between men and woman and her piece depicts a man sitting on a higher tower of coins than the woman facing him. “I interviewed my mom, who works hard and doesn’t get paid as well as men do,” Norris said. “She’s lived with it. If women were paid as much as men were, poverty among working single mothers would drop.”

Expanding on Lila Stach’s theme of time running out for the Earth’s climate, the students later attended an assembly featuring Xiuhtezcatl (pronounced shoo-tez-cat) Martinez, a teen speaking about climate change. Sponsored in part by Sno-Isle Libraries and Humanities Washington, Martinez, an internationally known 16-year-old climate activist from Colorado and leader of Earth Guardians, spoke about the importance of caring for the Earth.

“I used to think that climate change was a privileged older white people’s concern,” the indigenous young man, originally from Mexico, said. “But it is our responsibility to care for the earth as well. People have fallen out of love with the world.” Martinez received a community service award from President Obama and has been featured on HBO, ABC, Showtime, and PBS. He talked about the need to reconnect to the earth and to each other.

With teens such as Martinez rallying students, Julie Glover is enthused by the growing interest in climate change and social justice island-wide. She met with South Whidbey High School’s drama club and green team last year and proposed using art as a means of educating young people about climate change issues. The collaboration has come to be known as CAP (the Climate Arts Project).

This year, CAP is designing and running the Earth Day activities at the high school as well as participating in an island-wide art show and also presenting a showcase performance at the Bayview Cash Store on April 19 on the subject of climate change.

“You can see how much these young people have to offer, both through their art and through their conversation,” Glover says. Her aspiration is for youth to share their voices with the larger community, with many more teen art shows and performances in the future.

“They are so worth listening to!” she says. “This is a real opportunity to celebrate the accomplishments of our young people, as well as to engage in a unique youth/adult exploration around the youth perspective on social justice issues. I can’t wait to see what they come up with this year.”

David Welton is a retired physician who has been a staff photographer for  Whidbey Life Magazine since its early days.  His work has also appeared in museums, art galleries, newspapers, regional and national magazines, books, non-profit publicity, and the back of the Whidbey Sea-Tac shuttle!