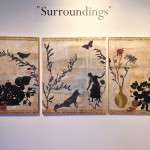 When you think of an art gallery show, you probably think of portraits and landscapes. Yet, in the ten years since Sandra Jarvis has been curating exhibits at Museo Gallery in Langley, she has never held a show devoted entirely to landscapes. Until now.

“When deciding on the theme of this show, I chose the title ‘Surroundings’ because it was suitably broad. I didn’t want to limit the artists’ interpretations of the subject matter.”

Melissa Koch, David Price and Evelyn Woods are three of those artists whose work will hang at Museo through Sunday, March 30. Each one works in a different medium to interpret and represent her or his surroundings.

Melissa Koch creates mixed-media art with names that range from whimsical to mythical to literal. The three panels of her “Picnic at Ebey’s Landing”—silhouettes of foliage, fern, and flower against a background as subtle as ancient Chinese silk—take up one entire wall at Museo. A newcomer to Whidbey Island, Koch finds herself constantly inspired by the place. “I notice the ever-changing colors and moods created by light interacting with water. The islands and mountains, viewed through passageways, add to the magic.”

Koch often takes her camera or sketchbook on walks in order to record natural forms. “Being on the island has deepened my connection with the land so that I’m working less from imaginary settings and more directly from my surroundings.”

“Vertumnus and Pamona” by Melissa Koch (photo courtesy of the artist)

David Price finds inspiration “in the biggest of skies and the smallest of scenes.” His encaustics (paintings using pigments and beeswax) cast a dream-like spell, enveloping the viewer in pearly mist or golden haze. “I’m inspired by the quiet solitude of the shorelines, especially when fog hangs in the air or clouds obscure the sun. I like my skies dramatic.”

Although most of Price’s work currently on display is suggestive of seascapes, he claims he is just as often attracted to the little things such as “a pile of freshly foraged chanterelles on a bed of moss.” Since Price builds his own panels and applies several layers of materials, by necessity he works out of doors for “the loudest, dustiest part of the process.” Once he moves into the studio, he begins working with color, light, proportion and texture to create the canvas on which borders blur and boundaries smudge, shimmer and shift.

The tree portraits by painter Evelyn Woods represent a lifetime of observing and appreciating the unique histories and forms of trunk and limb, leaf and branch. Her extreme close-up perspective reveals the blemishes and beauties of each form, made more so by the separation of the tree from the surrounding landscape.

Woods works from photographs supplemented by memory, which she defines as “a felt sense of place and a perceived visual stored in my psyche over many years.” Her favorite walks on the island include Ebey’s Landing and Deer Lagoon, where she finds the requisite space and solitude. But the trees that become subjects in her paintings are not always found in faraway places or pristine nature. “One of my favorites is a Japanese maple in a courtyard in Langley. I also painted a birch I found growing at the edge of a grocery store parking lot in Freeland.”

Photos at the top:  “Picnic at Ebey’s Landing” by Melissa Koch as part of the Surroundings show at Museo Gallery (photo courtesy of the artist)

Dianna MacLeod is an alumna of Hedgebrook and holds a degree in journalism from the University of Michigan. Her novel “Sainted” is somewhere between nearly finished and on its way back to the drawing board.