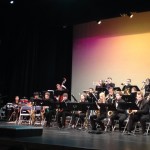 Congratulations to the South Whidbey High School Jazz Ensemble for their superior performance at the Lionel Hampton International Jazz Festival in Moscow, Idaho.

Competing against bands from across the United States and Canada, the Large Ensemble placed First once again. They were recognized for their challenging programming and mature style and control, as well as outstanding solo work from Jack Hood on piano and Patrick Shive on Tenor Saxophone.

Individual awards went to Jack Hood who received Honorable Mention in the Solo Piano category for the second year. Excellent scores were also received by Mara Bush in the Solo Saxophone category and Mei Hensler for Solo Violin.