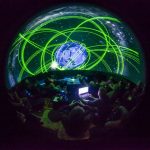 Take a Journey to the Stars Without Leaving the Island

The ship awaited. Dr. Rick Ingrasci, the mission leader, stood before its smooth, black, domed skin and briefed the group of 15 explorers sitting before him. This would be a quest of discovery.

Feeling ready, he led them in through the arched portal. One by one, they left the world as they knew it behind, perhaps for good. Navigator Joe Menth took his seat at the command panel with experienced pilot James Whitcomb at the controls next to him. Menth welcomed the explorers as they settled into their reclined seats, gave brief flight instructions, and then gave Whitcomb the nod to launch.

The ship went dark. Then all at once, the cosmos opened, surrounding them. As planet Earth fell away beneath them, Whitcomb gracefully turned the vessel around for a view of it and the surrounding universe, and a new perspective began to find its way into the travelers’ minds.

The ship of imagination was the StoryDome, and its mission that evening was already being realized. As Menth and Whitcomb took participants on a visual journey through time and space, they found their notions of the universe, and their place in it, challenged.

The journey began in 2009, when Ingrasci met David McConville, the owner of a company called Elumenati, who created the GeoDome technology that is the StoryDome. They, along with Joe Menth and James Whitcomb, created a film using the Uniview digital universe atlas software that is used during presentations. That film became Earth Portal: A Guided Tour of the Universe and Our Place in It, an exhibit shown in the dome at the Seattle Center during the 50th anniversary of the Seattle World’s Fair, which took place in 2012.

The experience inspired Ingrasci to continue the work. “My background,” he says, “is in psychiatry and public health.” Ingraci received his doctorate in medicine from Cornell University Medical College and a master’s degree in public health from Harvard University. “I have had a lifelong interest in the relationship between culture and technology, having studied and worked with Buckminster Fuller and Marshall McLuhan,” he adds.

The StoryDome is a project of New Stories, an educational nonprofit. “Our mission is to promote the possibility of new stories for our planet, for our living together, for our relationships,” says board co-president Lynnaea Lumbard. “The dome helped us do that. It’s a vehicle for creating a sense of oneness among a group of strangers watching it together. They feel a momentary sense that we’re all part something larger and recognize that.”

Today, the StoryDome is housed in its new location at Ken’s Korner, where the relationship between humans and technology continues to be investigated. Ingrasci, Menth, and Whitcomb are currently exploring the topic “Living Our Lives in a Larger Story,” and the 15 who gathered that night came to learn more about the subject.

The perspective from inside the StoryDome, with explorers reclined and Joe Menth at the controls. (Photo courtesy of Joe Menth)

The presentation, narrated by Menth and piloted by Whitcomb, explores the history of the night sky constellations through art, belief systems, and science. They examine the ever-growing universe and humanity’s place in it, however small that may be. At the same time, they demonstrate just how interconnected everyone and everything in the universe truly is.

“My worldview has shifted to accommodate multiple perceptual lenses: filters through which I can more readily see patterns within whole systems, continually revealing the deeply interconnected nature of the Universe,” says Menth.

Whitcomb agrees, “I recognize the powerful catalyst (the dome) has been in my own experience, and want to share with others new ways of perceiving this beautiful world and awe-inspiring universe.”

The aurora borealis from space, as seen from the simulated flight inside the StoryDome. (Photo courtesy of Joe Menth)

As the presentation concluded, the group of intrepid explorers gathered to share their personal take-away from the experience. That same story in the dome conjured a very different reaction in each of the visitors. Some were inspired to focus on how children are raised. Others reflected on the current state of politics. Perhaps one of the more profound, yet simple, revelations was about the finite resources of planet Earth. In this, it was pointed out that all the fresh water that will ever be made on Earth is already here, and that every breath that has ever been inhaled and exhaled by all living things is still here. In short, humans share the breath of their ancestors.

This presentation is just the beginning, however. Ingrasci says that the StoryDome can be used for a wide variety of purposes. “We see this as a unique community resource,” he adds, “There are many ways of telling stories.” The StoryDome is designed to stimulate conversations.

To truly appreciate the inspiring power of the StoryDome, it’s best to experience it yourself. Fortunately, that opportunity is available to everyone. On April 8 and May 6, Ingrasci, Menth, and Whitcomb will present the StoryDome experience “Living Our Lives in a Larger Story” again, beginning at 7:30 p.m. (Reserve your spot by emailing Rick Ingrasci.) There, you can learn what StoryDome folks mean when they say, “Transforming your personal story can change your life, and transforming our collective story can change the world.”