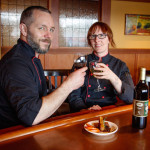 So what does this have to do with pairing food and wine? Just as peanut butter and bananas can taste better together, a specific wine, when paired with a certain food, can make something even more magical happen.

For hundreds of years, food and wine pairing was simple. Local cuisine was matched with local wines. Then along came Auguste Escoffier, the French “King of Chefs.” Escoffier is often credited with creating the mandate that red wine should be paired with meats and white wine should be consumed with fish and fowl. Over time, these guidelines became standard practices. Heaven forbid if you chose to drink your favorite White Zinfandel with a green peppercorn-encrusted filet mignon.

That said—taste bud nirvana can be achieved when the right wine meets the right dish to form a match made in heaven, and that leads us to some good news for folks on Whidbey.

On April 18, Roaming Radish and Spoiled Dog Winery will be teaming up to host their second annual “Tastebud Nirvana” food and wine pairing event. Jess and John-Paul Dowdell of Roaming Radish will be creating five tapas-style dishes that will be paired with five different wines produced by Karen and Jack Krug of Spoiled Dog Winery. Their joint goal is to mesh their talents, share their philosophy about food and wine pairing, and to debunk the classic rules.

The Dowdells and Krugs are extremely passionate about the relationship between food and wine. Their passion goes beyond food and wine pairing to encompass the source of their ingredients as well as the practices used to produce them. The Krugs use sustainable growing practices in their vineyard and purchase grapes from other vineyards with a similar commitment to sustainability and biodynamic growing practices. Similarly, the Dowdells are committed to using only the freshest ingredients sourced from local producers whenever possible.

Spoiled Dog is the only Whidbey Island winery currently producing estate-grown Pinot Noir wine and is one of a handful of wineries in Washington State that grows Pinot Noir grapes. They will be pouring their newly released 2013 Estate Pinot Noir and 2014 Estate Rose of Pinot Noir, along with their 2012 Malbec, 2014 Sauvignon Blanc and 2013 Deception—a Bordeaux blend of Merlot, Cabernet Franc and Malbec.

The dishes Roaming Radish will showcase with the wines will emphasize local products, utilizing whatever ingredients are available and fresh the day of the event. Your taste buds can expect to be titillated while sampling dishes featuring ingredients from local Whidbey Island sources such as Penn Cove Shellfish, SkyRoot Farm, Willowood Farm, Glendale Shepherd Cheese and Quails Run Farm. In addition, at least one dish will include Spoiled Dog’s lavender-infused Estate Verjus, a vinegar alternative made from unfermented grapes.

The event takes place from 2 to 4 p.m. on Saturday, April 18 at Roaming Radish at 5023 Harbor Hills Drive in Freeland. Participation costs $45 per person and reservations are required to attend the event, which is expected to sell out. To make reservations contact Spoiled Dog Winery at 360-661-6226.

If you’re unable to attend, Spoiled Dog and Roaming Radish will be teaming up for two winemaker dinners later this summer. Visit the Spoiled Dog website for more information about these events.

Image at top: John-Paul and Jess Dowdell, owners of the Roaming Radish   (photo by David Welton)