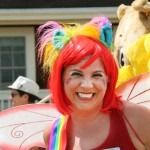 And then there were two. The 2nd Annual Queer Pride Parade on Whidbey happened under sunny skies in Langley on Sunday Aug. 2.

There was celebration, and rainbow colors were everywhere in downtown Langley for the parade that was organized by Kathryn Morgen and Bonnie Stinson. WLM photographer David Welton was there, and this time he was joined by intern Emily Alexander. WLM is pleased to share both of their photographs in this photo essay.

Emily Alexander is a 17-year old amateur photographer from Ballard. Her grandparents, aunts, uncles and cousins on her mom’s side (the Littles) live on Whidbey Island and she frequently spends summers on the south end helping her grandparents, working for her grandpa around the farm and spending time with her “awesome family.”

In 2016, Emily will graduate from Ballard High School in Seattle. Her goals are to go to college at Whitman in Walla Walla after high school graduation, become a research psychologist and, of course, continue her photography.

Last summer, during her annual visit to Whidbey, Emily entered some of her photographs in the Fine Arts Photography department at the Whidbey Island Area Fair. She not only won a number of ribbons, but also volunteered as a steward for the photography exhibit. This summer, she has graduated to the position of Superintendent’s Intern, and will be on-site for the duration of the fair. In the meantime, she has spent the summer photographing various island events under the tutelage of David Welton.

These first nine photos are by David Welton.

Charlie Murphy, Grand Master of the 2015 Parade, and his husband. Eric Mulholland.

Angela Merici from the Sisters of the Mother House of Washington wins for most decorative eyebrows!

Matilda the Hunn rocks the color pink this year, and right behind are Bob & Kathy Reim of Skagit PFLAG.

Dyke on Tractor follows a little further behind the traditional starters of the parade, the Dykes on Bikes.

The photos below are by Emily Alexander

Tisa Seely, the volunteer coordinator at WAIF, winged her way through the parade.

Michael Morgen with Whidbey Children’s Theater shows us the new style of beards with flowers.

The Langley police managed the parade route and added a touch of pink.

Whether you sported skates and colorful socks…

or fishnets and pink platforms, everyone was welcomed at the Queer Pride Parade.

Charlie Murphy and Eric Mulholland ride off on their next adventure. Read more in this feature by Katie Woodzick. More on the annual Queer Pride Parade here.