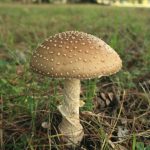 The Ballerina With Fangs: A Cautionary Tale for Foragers

It’s lunchtime on Whidbey Island, Tuesday May 9, 2017, a beautiful sunny day, and I remember some intriguing fungi I’ve been spotting out in our field. Just the ticket for an incredible meal.

It had been a rough couple of weeks. My wife Mary, our kids, and I had been shuttling over to Idaho and back, attending my parents’ move into a senior living complex. Then my father had a sudden stroke and died. With a sigh, we looked forward to the joy of our daughter’s wedding in two weeks.

I’ve been a forager for 40 years, beginning in Alaska, where it was mainly a way of saving money and avoiding more salmon. Moving south in ’83, the opportunities broadened to include beaver enchiladas and minor’s lettuce salad, among others. I love the atavistic pursuit, and mushrooms in particular, as we often have a plentiful bounty in the fall. So, to discover a springtime addition was particularly exciting. Amanita velosa, also called the Springtime Amanita, was described as delicious.

The Amanita genus of fungi are well known to foragers and many non-foragers; there are fatalities every year from the deadlier species, and their common names reflect their notoriety, like “Destroying Angel” (A. ocreata) and “Death Cap” (A. phalloides). I was aware that Amanita velosa was very similar to a poisonous cousin, Amanita pantherina, which sounds like a ballerina with fangs, but over the previous couple of years, I had convinced myself that the specimens I saw were the delectable variety.

Was I genetically predisposed to thinking of myself as the John James Audubon of mushrooms? Some individuals compile life lists of birds, some collect big mammal heads and horns or very large fish, but one of my passions happens to be fungi. I enthusiastically collected a half dozen of the critters and told Mary to get ready for one incredible meal.

But for insurance purposes, I called a friend here on the island who collects foraged products commercially, to see if he had ever eaten this mushroom. He replied that he had never encountered A. velosa around here and knew little about it, but nevertheless wished me luck and asked me to call him post-ingestion to report on its edibility.

Then I called my son-in-law, an experienced, though not commercial, forager who likewise knew little about it. I could have put that input to good use, but I was too cocksure to hear the ambiguity from them and forged ahead with the lunch plan. I later learned that commercial foragers will have nothing to do with anything that has the Amanita moniker attached. I also learned that A. velosa doesn’t grow here. I should have called a mycologist.

Chopped up, sautéed in a mound of butter, and then sprinkled with a bit of garlic, I brought the mushrooms out to the sunroom to join the cottage cheese and Mary’s salad for a healthy lunch that fit perfectly with my desire to shed a few pounds. They were incredibly delicious, so tasty that Mary gobbled up her serving before touching the other two courses. A piece of toast completed the ensemble. Satiated, we returned to our work, skipping our regular duel with cards. She went out to water her nursery, and I went out to my shop.

About an hour after the fateful repast, my woodworking project began to take on a different sheen. The curves began to stretch out and became linear, and it quickly occurred to me that maybe that wasn’t A. velosa after all. I can’t say that I was exactly worried by these initial hallucinations (I had experience with hallucinations in my innocent youth).

I was in a state of denial, no doubt camouflaged by the effects and immune to the implications of what might be next. I went to the garden for reasons unknown, where Mary found me and said she was likewise feeling dizzy. She attributed it to the fatigue that had been accompanying her the last couple of days and went inside to lie down. I went back into the shop, increasingly disoriented and confused about what to do next. At this point, time warp commenced, and I can’t relate an accurate version.

Apparently, Mary texted the kids to say she was feeling funny and that we had eaten mushrooms. The next thing I recall happening is Brita, our youngest daughter, giving me a call to check out what I was going through and then telling me to call 911, which was good because I was still, even in that state, in denial of the gravity of the situation. But her direction persuaded me at that point to call 911, tell them we had ingested mushrooms, and give them our address. About this time, Mary was convinced that she was dying and was grieving that she would miss the wedding. She was also spouting gibberish on a phone call with Brita before I got her call.

Meanwhile, our other daughter, Leah, also called 911, which is comforting even now. The next thing I remember is walking out on the driveway to greet the EMTs as they arrived, at which point I’m told I completed a perfect face plant. A nose cut is the only evidence I have of that. I must have gotten up after that and tried to walk to the house with the EMTs because I unloaded my lunch on the lawn and remember collapsing there.

The order of these events is tentative; I have only blurry snapshots that really can be arranged just about any way you like, but they all resolve into an ambulance screaming away from the farm. I was out, although they said I chatted all the way to Coupeville, and I don’t remember any siren. The only siren I heard that day was pantherina’s ditty. If only I’d tied myself to the mast.

Amanita pantherina. Mushrooms can have several faces. The pantherinas the Fishers consumed had lost most of their telltale warts and resembled the A. velosa.  (Photo by ccfarmer CC BY-SA 3.0)

The rest of the account of our Whidbey travels was replayed for us by Mary’s brother, who rushed to the hospital after our arrival and who talked to the support personnel.

Halfway to the hospital, we were met by another ambulance, and Mary was transferred to it because the one we were both in was not big enough to handle the entire crew. She was intubated en route and delivered to the WhidbeyHealth Medical Center, thirty-five miles north of our place. The facility there was slammed with arrivals, so no emergency room was available. Because of that, and the fact that they knew nothing about mushroom poisoning, they deemed it wise to fly us to Seattle.

In my delirious state, I battled with the intubation procedure to the degree that they handled and restrained me as though I was Hannibal Lecter. Neither of us remember our million-dollar chopper rides, two separate conveyances to the city, as the hospitals there were also topped out. Mary went to Swedish, and I was flown to Virginia Mason two hours later.

I woke up to a jumble of tubes and that damn intubating device jammed down my tracheae early Wednesday morning. I wanted to talk, but they didn’t like me trying and had to restrain me a bit again. I was finally given a felt marker with paper held in front of me, Leah and Brita close by. Over the next three hours, I wrote out for them some marginally appropriate notes, like fantastic lunch, good fertilizer, maybe get a soil test, best place to plant mushrooms, and one very appropriate one: how’s Mom doing? They tell me I was putting on a show for the staff attending to me. Ever the clown. Really.

We were in hospital Tuesday and Wednesday with an endless series of blood draws and vitals checks, buffered lovingly by the ministrations of our daughters and our son Andrew, who flew from Berkeley to be with us. Thankfully, the two hospitals were within several blocks of each other, as the three kids were shuttling back and forth between them to track our progress.

Mary was much slower coming to the surface, possibly because of the different sedatives we received. She got Ativan, while I was given Propofol. The Propofol washes out sooner but can apparently be tough on the liver. Thankfully, unlike some of those other toxic amanitas, liver damage from A. pantherina poisoning is minimal in general. We were told to expect full recovery.

Other than being near death, save for the efforts of our cherished children, we were and are touched by their full-time attention and the love sent our way by friends and relatives. The panther nearly ate us.

At a mushroom walk offered by the Whidbey Camano Land Trust in 2015, Ida Gianopulos said, “If you don’t know what it is, kick it, don’t pick it.” (Photo by David Welton)

We had advocates pulling for us around the clock. In addition to the medical staff and technicians who opened the curtains, turned on the lights and saved us from having a heavenly lunch, there were family members racing to WhidbeyHealth and making critical calls to try and identify just exactly what kind of mushroom we had consumed. By the time the EMTs arrived, I was unable to talk much and most likely could not have provided that. The various toxins found in mushrooms call for different strategies. The compounds found in two closely related species A. pantherina and A. muscaria are apparently some of the oldest intoxicants known.

One of the factors influencing my misidentification was the location of the mushrooms. A velosa is normally found in the open, near its mycorrhizal host tree, but yards beyond the canopy. A. pantherina is typically found under the canopy, but can also creep out into the meadow. With our shifting climes, weather, and cooler spring this year, habitats are also shifting, and species are drifting north. So range information can no longer be entirely trusted.

Then there’s the slow drift of misinformation. A well-known weekly magazine recently published a story about the relative safety of hallucinatory mushrooms as compared to other recreational substances, and yet accompanied the article with a photo of Amanita muscaria, which can be fatal in large doses.

There has never been a substitute for diligence, especially if a person is called to hunt fungi. There are safeguards that, in this case, were somehow given short duty:

Tom Fisher is a cabinetmaker from Clinton. He and his wife Mary raised three children on the farm and have been foraging for food, rocks, and income since 1983. He occasionally takes a story like this and puts it to music.