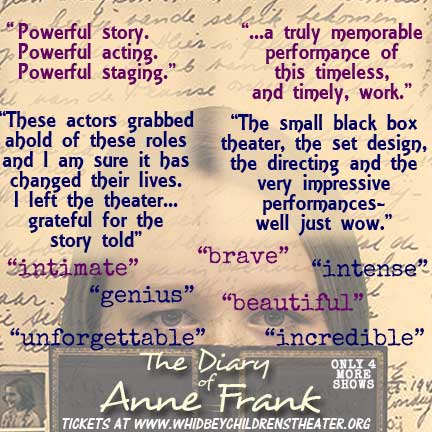 ‘The Diary of Anne Frank’ met with acclaim at WCT

“The Diary of Anne Frank” met with overwhelmingly positive response during its opening weekend at Whidbey Children’s Theater.

Presented in WCT’s newly transformed Black Box style theater, audiences are transported to another place and time as they enter the annex with the brave souls who lived there for two years during the Nazi invasion during WWII.
One patron commented that she and her husband had travelled all the way from Seattle just for the production, since it is her favorite play. Afterward she beamed at the production, saying “It was the best present I’ve seen in a long time.”
Another audience member, who spent part of her childhood in Holland during the occupation, remarked on the play’s authenticity, intensity and faithfulness to the spirit of that time.

Tickets are available at www.whidbeychildrenstheater.org. Call 360-221-8707 for further information.