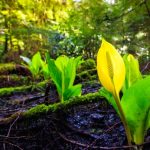 The Floating Forest of South Whidbey

An old-growth forest in balance is a rare gift worth preserving and celebrating, says Elliot Menashe, an environmental consultant who believes in working with nature instead of against it.

Old-growth, forests, such as this one at South Whidbey State Park, help prevent soil erosion and clean the water used for drinking, says Elliott Menashe, an advocate of using existing natural landscape to maintain the integrity of the land. (Photo by David Welton)

Menashe, a forestry graduate from UC Berkeley, now runs Greenbelt Consulting to educate clients in environmental management along with land assessment, mitigation, and restoration. On a rainy March morning, while walking the Wilbert Trail at South Whidbey State Park, Menashe gestures to a “floating forest” with his arms wide open. The woods capture his enthusiasm as much as the Seahawks capture football fans. This part of the park is composed of the interwoven roots of trees, some 300 to 1,000 years old, floating above a wetland.

“The interconnection of laterally-growing roots protects the whole stand,” Menashe says. “If this were a cleared area, we’d have 30 times the amount of runoff you see now. With the kind of rain we’ve had, there would be a mud hole and a flash flood. The gentle creeks moderate the flow of water to slowly percolate into the aquifer.”

Using a probe to measure the depth of water beneath the floating forest at South Whidbey State Park, Elliott Menashe explains that such forests are rare in modern days. (Photo by David Welton)

The forest was saved from being clear-cut in 1977 when activists formed Save Our Trees and rallied, placing themselves between Department of Natural Resources chainsaws and the old growth trees. Save Our Trees raised private funds and, together with public money, eventually purchased the land and added it to South Whidbey State Park. Menashe says the very best of the old trees were logged years ago to rebuild San Francisco in the wake of the 1849 fire and to build ship masts. Yet old titan trees remain, towering over the forest, their lateral roots, growing on top of fallen ancestors, weaving together a carpet of moss, cones, needles, sticks and dirt that float above the wetland, which is lit by yellow and green swamp lanterns this time of year. Educational signs line the trail and describe the role of the floating forest and the interconnectedness of the land and fauna.

Swamp lanterns, also known as skunk cabbage, are a sure sign of wetlands. Wetlands are protected on Whidbey Island and help keep our drinking water clean. (Photo by David Welton)

“There is a whole world under our feet that we don’t consider,” Menashe says, taking a metal probe and inserting it into the forest duff between the lateral roots of a giant Sitka spruce. He reports that water is flowing within a few feet of the seemingly solid ground he is standing on. “That’s why you need to slow down and really look at what we have here. The trees communicate through an underground symbiotic and mutualistic soil relationship.” That relationship, Menashe says, helps ensure clean water, prevents erosion, and creates a balanced forest community. (To better understand how trees communicate with each other and cooperate with their environment, view Suzanne’s Simard’s TED talk.)

“Fresh water, forested, mature old growth — there is almost none left in the Puget Sound lowlands,” Menashe says. “How much money does this cost society by not preserving them? It could take a thousand years to rebuild this if it were taken down.” Menashe says the trees, plants, and moss act as a sponge to prevent damage from storm water runoff. Plants absorb toxins and clean the water that flows into the aquifers that provide drinking water to much of South Whidbey.

Students at the Calyx Community Arts School, a nature-based classroom in the former ranger’s home across the street from the floating forest, learn the importance of maintaining healthy forests and living in balance with nature.

Lisa Kois founded Calyx following her work in South Asia as a human rights lawyer, writer, and documentary filmmaker. She uses the 347-acre classroom at South Whidbey State Park to teach the transformative powers of nature and the arts to students from ages five to 10.

Lisa Kois, creator of the Calyx Community Arts School in South Whidbey State Park, believes in the power of nature as a classroom. (Photo by David Welton)

Richard Louv, author of “Last Child in the Woods” and “The Nature Principle” documents the benefits that time spent in nature has on the development of the human brain. “Connection with nature and the multi-sensory experience that time outdoors provides opens neural pathways and facilitates learning of all kinds,” Kois writes on the Calyx website. “Time in nature helps children succeed in all areas of their lives and development — whether it’s learning to read or write or play a musical instrument or chart the phases of the moon.”

Menashe says hope for the future lies in understanding the need to preserve our heritage forests, such as the floating forest of South Whidbey State Park. “When short-term economic gain is considered, the long-term ecosystem services that save society millions of dollars in restoration suffer. With preservation, we get clean water, lack of floods, and an aquifer recharge.”

As Earth elders such as Menashe wonder whom to pass the torch of advocacy to, it’s a comfort to know that all they have to do is cross the street to Calyx.