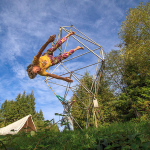 Among those who have devoted their lives to the pursuit of the elevation of human consciousness, Larry Dobson has upped the ante in a remarkably literal fashion. Way up. On stilts.

Dobson has been entertaining crowds throughout the Northwest for more than 40 years—as a stilt-walker in brilliantly colorful costumes, portraying 11-foot tall characters ranging from Uncle Sam to Phoenix the Firebird. Almost everyone who lives on South Whidbey has seen him striding down the street in a parade or dancing with the crowds—although high above everyone else—to a live band at a festival.

Dobson swooshes by as author Russell Clepper turns the “Thinker Toy” for him. (photo by David Welton)

He is also an inventor who makes most of his own stilts and also, sometimes, gives workshops to kids of all ages about how to make their own. He recently built a prototype for what he calls an “articulated, spring-toed sprint stilt.” His design allows the stilt walker to control the “foot” of the stilt on the ground with the natural movement of his own foot in a more comfortable and stable way.

Dobson holds models of fundamental forms that he made. (photo by David Welton)

Widely recognized around the island as one of the most creative geniuses in a community of creative geniuses, Dobson was an inventor well before he was an entertainer on stilts. His first stilt gig was at the 1971 Maxwelton 4th of July Parade. By that time he had already studied chemistry and physics, gotten a degree in Political Science, studied in Germany and served in the Peace Corps in India. His two-year sojourn in the cities and small, remote villages in the Utar Pradesh, or the North Province, changed his life.

He had gotten so thoroughly immersed in the lives of the farmers he was helping in the Indian countryside that he experienced a kind of reverse culture shock when he came home. It took him 10 years to fully readjust to life in his native land.

Searching for a way to serve poor rural people in the United States, he joined Vista, the domestic version of the Peace Corps. While training in Kansas, he met Paula Sullivan, his first wife. “I met my wife at the Osawatomy Mental Hospital in Kansas,” Dobson said with a laugh. “It was crazy.”

They were assigned to work in Boon County in West Virginia where they lived in Gerald’s Bottom on the Little Coal River. They helped mental patients make the transition from hospital facilities back to their homes. Unfortunately for many of them, life at home was actually the source of much of their mental illness. Domestic abuse was a major problem in many of their families.

“It was there that I learned about the ineffective nature of county health departments and the distorting nature of money, coal mines and of being slaves to the big corporations,” said Dobson.

Many of his inventions serve the greater purpose of helping people escape from what he has called “humanity’s crippling old ways”—systems that impoverish people and deny them the chance to develop their full potential as human beings. He has designed and built many alternative, energy-efficient prototype heating systems and has received a number of grants through the years for his work. Other projects and inventions of his include solar collectors, several types of wind turbines, human-powered vehicles and specialty tools. The plans for many of them are available for free downloads at his Fundamental Form website.

Dobson has also built beautiful homes, structures based on the geometric designs found in molecular structures that he has studied for most of his life, incorporating indigenous and other “green” materials. Unfortunately, county officials have, more often than not, failed to understand how strong his designs were. He has endured stop-work orders and even had to tear down structures and burn them due to the intransigence of local governments. This led him to help lead the fight in Island County many years ago to get a more innovator-friendly ordinance enacted. However, he said, the law has been eroded over the ensuing years and become more restrictive once again.

Hanging out in the half-octahedron shaped tent. (photo by David Welton)

All inventors need investors and Dobson welcomes the interest and help from anyone who understands the value of his work, which is devoted to creating a human community that is more aligned with and kinder to the greater natural world of which it is a part. Combining ancient and new technologies, Dobson seeks to help provide some of the basic human needs—housing, energy and food—in forms that reduce pollution while allowing people greater access to them at lower cost.

He has a deep passion for what he calls the fundamental facets of life: the atomic and molecular crystalline forms of minerals and basic elements. Tetrahedra, octohedra, dodecahedra (respectively, four-sided, eight-sided and twelve-sided structures) and the pure diamond form are the shapes that invite his mind to contemplation. Models he has constructed of those shapes hang from the ceiling and window frames of his home in Clinton and they fill boxes in his sunroom.

Flying through the air—Larry Dobson adjusts his attitude by adjusting his altitude. (photo by David Welton)

Dobson is also currently involved in a start-up company called Geoships SPC that is developing geodesic home kits. He is working with a growing team of collaborators, including Morgan Bierschenk, the young CEO of the company. The team, with Dobson as Director of Research and Development, is creating construction materials based on a fusion of new and old ideas. Inside panels consist of an insular foam made of hemp-oil and recycled plastic bottles that are covered with particle board made with hemp fibers and hemp (or soy) oil. These form the inside walls set inside a shell of interlocking triangles made with a magnesium-phosphate based cement—an adaption of ancient cement recipes that is four times stronger than Portland cement.

Bierschenk and Dobson hope, however, to not only provide these homes as beautiful and potentially less expensive alternatives to traditional housing but, through the company, provide a way to initiate movement toward a gifting economy. Their pricing system is as radical and ground-breaking as their products. Their way of thinking fits into contemporary movements that include open-source coding, skill-sharing and the gifting philosophy espoused at Burning Man.

One thing he does believe in is having fun—his favorite part of the word “fundamental.” Thus the stilts. Thus the trapezes that hang from his ceiling in his living room and the pole beam in his octahedron-inspired tent. Thus the “Thinker Toy” or “Attitude Adjustor”—two of the names for that legendary swing of his.

Dobson demonstrates a practical application for stilts: apple picking in his garden. (photo by David Welton)

He built the swing in 1973, just three years after arriving on Whidbey Island. It is a Buckminster Fuller-esque structure rising 26 feet from a spindle bearing in the center of a tire that is simply laid on the ground. Constructed of tubing whose ends screw into joints that Dobson welded together, it spins, perfectly balanced on its ground-level axis. Three guy wires stretch from the top of it to three different tree trunks, each one about 150 feet away. A half dozen or more swings hang from the outer vertices of the triangular spaces that the tubes describe. Hundreds, maybe thousands of people have spent many hours screaming in delight as others turned the structure and the swings spun out into space and around and around the giant tetrahedron-octahedron grid.

Perhaps more than anything else, it stands as tangible expression and tribute to who Larry Dobson is: artist, visionary, entertainer, thinker, doer, inventor, giver.

Image at top:  The man, the swing, the tent (photo by David Welton)