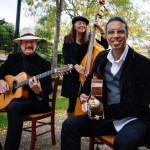 Working exclusively with Django Reinhardt’s body of work, the trio strives to present his music with the purest expression possible, eschewing any amplification except a single microphone placed in front of them as they perform. Although band leader and guitarist Troy Chapman, guitarist Keith Bowers and bassist Kristi O’Donnell each have long resumés in music-making, the Hot Club of Troy is just one year old. However, this nearly nascent act will open this year’s prestigious DjangoFest Northwest at WICA in Langley at 8 p.m. on Wednesday, Sept. 23.  Lance Cercel and the Roma String Ensemble will also perform that night. The headliner for this year’s festival is Bireli Lagrene, the “undisputed top guitarist in the gypsy jazz genre” according to the festival’s website, and according to Chapman and O’Donnell as well.

Chapman himself is no stranger to the DjangoFest stage. One of North America’s premier interpreters of the genre, the Whidbey Island resident has been a member of the influential Seattle gypsy jazz group Pearl Django since 2010. Along with the Robin Nolan trio, Pearl Django starred in the first DjangoFest Northwest in 2001, and they have appeared every year since that highly successful beginning. On Saturday, Sept. 26, Chapman will perform with Pearl Django once again, sharing the bill that night with the Hot Club of Detroit.

The Hot Club of Troy’s debut at DjangoFest caps a year of advanced musical exploration of Reinhardt’s music by the group. “One thing we do is play not only strictly gypsy jazz, but we only do Django’s compositions. He wrote 84 songs and some of them are rarely heard,” said Chapman. “We want to do stuff that people haven’t heard, to dig deeper into his repertoire and learn about his influences. We don’t want to present great guitar playing so much as his songs as great compositions.”

Of course, Chapman and Bowers are highly regarded guitar players and their shows certainly feature expert picking. O’Donnell explained the group has labored to meld Bower’s chordal style of playing with Chapman’s straight ahead approach as they have explored ways of performing Reinhardt’s music. “We work at weaving the two styles together,” she said. “We’ve worked really hard to make that happen,” Chapman added. “You have to learn first how Django did it, then you can put your own style in it.”

Another reason they formed a gypsy jazz trio was to create opportunities to play that style all year long, not just during the time of DjangoFest. Their home base venue has been Useless Bay Coffee Company (UBCC), which is where the three musicians first jammed together on Tuesday nights for awhile. That collaboration resulted in the formation of one of Whidbey Island’s finest bands, Trio Nouveau, whose repertoire is mined from the swinging jazz of the Great American Songbook.

“When we’re playing there, we joke that we’re fueled by UBCC coffee,” said O’Donnell. “Lots of eighth notes!”

UBCC owner and head roaster Des Rock has been a stedfast supporter of the group, as well as of local live music in general. “He told us that ‘the quality of the atmosphere goes up every time you play!” said O’Donnell. We’re really lucky to have Des. He rocks!”

The popular Langley hangout is the only coffee house on the island currently offering a steady program of live music. Historically, coffee houses have often provided a place for musicians to perform in public and sometimes become important incubators of musical talent and generators of vibrant musical “scenes,” such as one that is happening right now in Paris. In fact, a coffee house in Montreal was instrumental in the musical path of a young Troy Chapman where he spent countless hours at a place called the Yellow Door, one of the longest-lived contemporary live music venues in North America, and one well known among the folk and singer songwriter crowd on the East Coast.

The label for UBCC’s new “Django Blend” was created as a celebration of the Hot Club of Troy’s beginnings at the lively local gathering place. It was created by author, artist and gypsy jazz guitarist Irene Ypenburg.

The Yellow Door was the site of his first public performance. “I played ‘Goodbye Porkpie Hat’ with my new Electro Harmonix Small Stone Phaser plugged into the PA. Probably in ’78!”

If that truly was a hootenanny, Chapman must have caught some of the banjo players off guard with that one. It wouldn’t be the first time he has surprised people.

For example, The Hot Club of Troy’s association with UBCC has inspired the creation of a special offering for coffee lovers and music fans. “We are going to have a brand of coffee,” said O’Donnell, “the Hot Club of Troy ‘Django Blend,’ roasted by Des, in time for DjangoFest. UBCC will be selling the coffee that week and it will be online, too.”

That development was not part of their original mission statement, but the organic aspect of the coffee that Rock brews at his establishment does compliment their desire to nix amplification of guitars at the group’s performances. Chapman said, “There’s nothing like the beauty of the un-amplified instrument. There’s a great simplicity when playing with no amps.”

Hot Club of Troy’s bandleader, Troy Chapman, got his inspiration to play guitar from countless hours spent at the famous Montreal coffeehouse, the Yellow Door (photo by David Welton)

In some music circles that approach would be described as “organic,” meaning natural and unaltered by electronic amplification. Even though the guitar itself is a mechanical sound wave amplifier, the sound it produces is the result of the type and quality of the wood, the kind of strings, the skill of the luthier, and the expertise and soul of the musician. Any kind of electric amplification alters that “natural” sound. Even though the altered sound may be pleasing to the ear, it’s not the same as the un-amplified sound of a guitar.

Chapman has played plenty of loud music throughout his long career in music, but to get at the heart of Django Reinhardt’s sound he and his bandmates are taking this organic path to get there. Their show at DjangoFest will provide an excellent opportunity for local gypsy jazz addicts and music lovers to hear the Hot Club of Troy fulfilling their mission.

Langley resident Drew Christie has created an animated short film for DjangoFest Northwest. Christie’s work has appeared or been featured in numerous publications including the Atlantic and the New York Times. Hot Club of Troy’s bandleader Troy Chapman performs the soundtrack for the short which is titled “Django’s Hand” and tells the story of how Django Reinhardt turned a terrible injury sustained in a fire into the creation of a new style of guitar playing.

To see the 68 second-long film, visit this link on the DjangoFest Northwest website: http://www.djangofestnw.com.

Please check the following links for more information about the Hot Club of Troy and/or DjangoFest Northwest 2015:

And soon-to-be up online:
www.TheHotClubofTroy.com