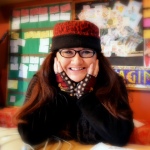 The Joy of Rejection: Suzanne Kelman

Walking into Suzanne Kelman’s home is like walking into a Mary Englebreit drawing. Warmth permeates every corner. Plaid couches, colorful rugs, and sweet-smelling candles form a kaleidoscope of color, scent and pattern. Everything in the house feels well-loved and welcoming.

The book is the first in Kelman’s Southlea series, which centers on life in a small town (inspired by Langley). A librarian from California moves to Southlea and joins a book club where the women celebrate their friendship through rejection letters from publishers.

This is Kelman’s second book. The first, “Big Purple Undies,” was co-written with her sister. They collected humorous stories and performed them on a 50-city tour of the U.S. in 2004. Memorable among the stories is “Dancing Dentures,” wherein a newly widowed woman attempts dating again, only to have her dentures flung from her mouth onto the dance floor by an overzealous potential suitor.

The tour was successful and 50,000 copies of the book were sold to audiences around the country. The experience was rewarding but exhausting.

After the tour, Kelman focused her energies on screenwriting. “The Rejected Writers Book Club” began in 2010 as a screenplay. Kelman soon discovered that its scope was larger than anticipated.

“There was so much more that I wanted to do with the story than I could do in 120 minutes,” she explained.

In November of that year, Kelman participated in National Novel Writing Month, or NaNoWriMo. Thousands of writers take part in this annual international speed-writing of novels. The idea is simple: if a wordsmith commits to writing approximately 1,650 words a day for the month, by Nov. 30 they will have produced a 50,000-word rough draft.

Kelman finished the rough draft of the book that November, set the project aside for a few months and completed the first full draft in February of the next year. She described the process of writing a novel with her trademark outrageous humor: “It’s like giving birth sideways.”

Kelman sent a polished draft to local literary agent Andrea Hurst in the summer of 2013. Encouraged by Hurst’s comments about the manuscript, she forged ahead with publishing the novel: reaching out to beta readers for feedback in August of this year, incorporating their suggestions and formatting the manuscript in Amazon CreateSpace.

It was always Kelman’s intention to self-publish the novel. It seemed inauthentic to the message of the book to seek a publisher, given that one of the book’s overarching themes is a gleeful challenge to the way we perceive rejection.

“What if we were to turn it on its head and make it what you desire?” Kelman asked.

Kelman worked with to Blondie’s Custom Book Covers to create a playful cover for the book. The ladies pictured on the cover drove through a red dust storm to arrive at the Texas photo shoot.

“The Rejected Writers Book Club” was released on Oct. 2.  When Kelman visited Moonraker Books to gauge their interest in selling the book, she was delighted to discover that local readers had already inquired about where and when they could purchase the book.

“If you read it, it will feel very familiar to Langley. You’ll know where you are,” Kelman explained. “People who love the quirkiness of small towns will enjoy this book.”

Kelman has already finished the second and third books of the series and will start writing the fourth in November. She considers the series a thank-you letter to Langley, celebrating the absurdities of life and the heart of small towns.

Above all, her goal is to bring joy and laughter to her readers.

“I never intended to be Toni Morrison,” she quipped.

Just beyond the title page of the book is Kelman’s tribute to her husband of 23 years and her 15-year-old son: “Dedicated to Matthew and Christopher, my soul supporters.”

Kelman knows exactly what kind of legacy she wants to leave as a writer.

“One hundred years from now, I want people to say, ‘Yeah, I knew Suzanne Kelman—she made me laugh.’”

Readers can buy “The Rejected Writers Book Club” at Moonraker Books and Amazon. Kelman will be at the Whidbey Island Writers Conference in Coupeville October 24-26, where signed copies of the book will be available for purchase.

(Photo at the top: Suzanne Kelman photographed by Sue Averett)

Katie Woodzick works at Hedgebrook as an External Relations Manager. She is also an actor and director who can be seen on local stages. She is currently playing Little Red Riding Hood in “Into the Woods,” which runs through October 25 at Whidbey Island Center for the Arts.