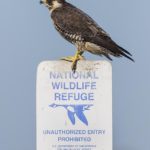 Join the Whidbey Audubon Society on Thursday, June 9 at the Coupeville Recreation Hall as Steve and Martha Ellis of the explain the National Wildlife Refuge System. This free public program addresses the origins of the system and some of the challenges facing the refuge including the recent events in Oregon.

The Ellises will offer specific ways to have a positive influence on refuges and the hundreds of bird species that rely on them.  Along the way they introduce some of the prominent refuges around the nation and include a sampling of Washington State jewels. They’ll also detail how the integrated refuge system shelters bird of passage on this the 100th anniversary of the Migratory Bird Act. This celebration of America’s second best idea concludes with a look at a very special refuge.

Coupeville residents Steve and Martha Ellis are long-time members of Whidbey Audubon Society. Steve is the current vice-president and Martha is a member of the Washington Native Plant Society. Together they’ve given nature walks, talks and taught bird classes for over 25 years.

Doors open at 7 p.m. to the Coupeville Recreation Hall, 901 NW Alexander St., the program begins at 7:30 p.m. preceded by a brief meeting. This is the last meeting of the season. Regular monthly programs resume in September. For upcoming events and activities of the Whidbey Audubon Society, see the website www.whidbeyaudubon.org.

Larry Ditto has given permission to use the attached photo.