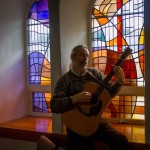 A tour bus rolled north in 2008 through South Korea towards the Demilitarized Zone. Among those on board sat Judy Collins, Melanie, Donovan and Don McClean and they would soon be singing for U.S troops stationed there. Karl Olsen was riding with them, the newest member of Seattle’s storied pop-folk group, The Brothers Four.

Karl Olsen, far right, performs with the Brothers Four. The other members, from left to right, are Mark Pearson, Mike McCoy and Bob Flick. (photo courtesy of The Brothers Four)

“I was the first one off the bus after it pulled up to the DMZ,” Olsen said. “As I walked toward it, there was a large group of people standing and kneeling just behind the line taking pictures of us. I hesitated and someone behind me told me to just keep walking.”

He did, and the line of photographers parted to let him and the other singers cross over into the most famous “no man’s land” in the world. “We performed in front of a bombed out building for a mixture of U.S. troops, South Korean troops and South Korean farmers who farmed by day in the DMZ and then headed home for the night,” he said.

Olsen is actually a bit of a homebody. Although he grew up in a musical Seattle family that performed locally, the gypsy troubadour life never appealed to him. He always preferred to be close to home, to his family and friends. Olsen has been the music minister at Trinity Lutheran Church in Freeland for 24 years. There he directs two choirs, adult and youth, leading them through a repertoire that features a variety of styles and often includes his original compositions.

Trinity pastor Jim Lindus said that Olsen has had a tremendous impact on the congregation.

“People come have come here because of him,” he said. “The choir had about five people in it when he started. Now there are about 45 people. That also mirrors the growth of the congregation, but he had a lot to with it. People enjoy singing under his direction.”

Olsen has also been one of the driving forces behind the church’s impact in the Freeland community. For example, the church provides a venue for concerts of both secular and sacred music. “Trinity has become a cultural center in Freeland as a result of his talent and efforts,” Lindus said.

Olsen’s older brother, Vern Olsen, is a highly accomplished musician and singer in his own right. He helped found the Whidbey-based sea shanty group the “Shifty Sailors,” in which Karl Olsen also participates, and was a member of the defunct but acclaimed Whidbey Island choir “Singchronicity!”  Younger brother Olsen was a member of that group, as well.

The elder Olsen, who is well known around the island for his colorful personality, said, “Karl is not like my dad and me. We’re both in your face. Karl is much more subdued. But he’s a much better musician than I’ll ever be. I love and appreciate him so much.”

He said his younger brother’s two greatest strengths are his talent, which he has turned into great skill, and his humility. The two Olsen’s still perform together as the Olsen Brothers, thus continuing the family tradition that their vaudeville piano-playing father, a Norwegian immigrant, established.

Olsen’s rich experience in music prepared him for the eventual invitation to audition to fill a vacancy in the line-up of the Brother’s Four. A serendipitous series of events culminated in the offer, which to Olsen seemed to come from “out of the blue.”

“You said yes, didn’t you?” his wife, Deb Lund, said when he told her about the invitation. Olsen wasn’t sure he was ready to tour away from home, should he even pass the audition. “You’re going to do it, aren’t you?” Lund asked later when he told her that group leader Bob Flick had asked him to join the Brothers Four at the end of a two-hour jam session. The next month, he found himself performing in front of thousands of people with the group, whose other members are Flick, Mark Pearson and Mike McCoy.

“Most of the time we just leave for a weekend to do a couple of shows. I only miss one Sunday,” he said.

However, the group regularly travels to Japan where it counts perhaps its largest, most loyal fan base. For one month, the four musicians travel throughout the country, playing to mostly sold out houses.

Olsen explained that when the group first toured in Japan in 1962, audiences loved the group’s sound, but also the ballads were slow enough and the pronunciation clear enough so that Japanese listeners could understand the words.

“A lot of people learned English from listening to our songs,” Olsen said.

The impact the music has had on the lives of many Japanese fans has been life changing. Olsen said, “One man told me that because of the Brother’s Four, he learned English. Because he learned English he went to college. Because of college, he met his wife, he had his kids, and he had a career.”

They played two shows in Oregon recently and will be back on the road in March to travel to the East Coast for a show with Tom Paxton and the Kingston Trio. On April 12, they will perform locally in Bremerton at the Admiral Theater. Their Japan Tour this year is scheduled for May 13 through June 15.

“It’s been an incredible, fun journey,” Olsen said. “The men in the group care about the music, about how it turns out. It keeps it alive and energized and creative for me.”

With his natural humility and the heart for service that his faith and experience as a minister have formed, Olsen exhibits an attitude of caring regard for his listeners and fans.

Karl sharing one of his love songs. (photo by David Welton)

“It’s all about the people you’re singing to. It’s not about you,” he said. “Sing to that person having a bad day. Give him that transcendent experience. That’s really the reason why I’m standing there.”

Karl Olsen has released two CD’s. “Heart of Mystery,” 1999, is a collection of Olsen’s original sacred songs and “This Love,” 2004, presents 21 love songs, both originals and covers.

For more information on Olsen, please check the following websites.

Image at the top: Karl practicing love songs for his upcoming concert at Trinity Lutheran Church. (photo by David Welton)