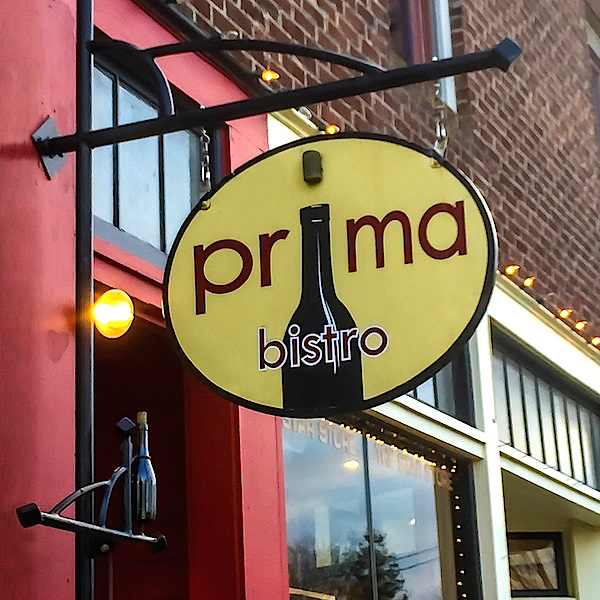 With his long braid and quiet demeanor, Sieb Jurriaans can often be seen at Langley’s Prima Bistro. Identifiable also by his white chef’s jacket and tattooed arms, Jurriaans and his wife Jenn opened the doors to their popular Whidbey Island restaurant in 2006.

In addition to writing the menu—French cuisine with Pacific Northwestern influence—owner and head chef Jurriaans has thoughtfully built, and maintains, the eatery’s extensive wine list. I sat down with Jurriaans during that quiet calm between the lunch and dinner rush to get an insider’s view of the list that he carefully curates.

The Prima Bistro wine list is a well-focused selection of over 100 bottles and 30 glass-pours from Oregon, Washington and several regions of France. “That all has to do with what goes well with what we serve here and also because of my own personal tastes,” Jurriaans said.

Region, price, taste, style and even the less tangible philosophical aspects of wine influence the selections when building a restaurant’s wine inventory. Jurriaans likes to think of wine as food. “Wine is meant to be an integral part of the meal, which is how they look at it in France. When I am building the list, I am thinking about what is going to go well with our food.”

Jurriaans tastes wines twice and sometimes three times a week with his distributor and, over time, the style of wines he is looking for has become well-defined, “I can taste wine and know immediately whether it is a fit for our list or not,” he said.

Specialty wines served by the glass are kept fresh in a WineKeeper. The Prima Bistro wine list features over 100 bottles and 30 glass-pours from France, Oregon and Washington.  (photo by Chris Korrow)

So what are the chef’s favorites?“I’m a big Burgundy and Southern Rhone guy,” he said. Burgundy wines are made with Pinot Noir grapes and Southern Rhone wines are most often blends based on Grenache and Syrah. “I think Southern Rhones are probably the best food wines there are,” he added. Emphasizing the wine’s versatility, Jurriaans often steers customers in this direction. These reds range from the lighter Côte de Rhone, which he noted “are light enough to go well with fish,” to the bigger Chateauneuf du Pape.

Jurriaans recommended a Southern Rhone as a wine pairing for Prima’s signature Ragu, a pasta dish rich with wild boar, olives and tomatoes. A glass of the Domaine de Piaugier from Sablet, a small village in the Rhone Valley, would be perfect with the boar, he said.

When asked to comment about the Oregon Pinots on his list, Jurriaans smiled and said, “I love Oregon Pinot Noir.” The Prima Bistro wine list reflects his passion for Pinot with more than a dozen choices of Oregon Pinots. “They make amazing, well-balanced wine.” The chef’s seriousness about Oregon wine is underscored by the fact that he attended Oregon Pinot Camp, a three-day, invitation-only intensive that takes place across  Oregon’s Willamette Valley and draws sommeliers and other top wine professionals from around the world.

As much as he loves reds, Jurriaans said white wine is the way to go when it comes to shellfish. A white wine with a touch of residual sugar—a Pinot Blanc from Dopff and Irion in the northeastern French region of Alsace—is his pick to accompany Prima’s spicy clams and chorizo, which is served in a hot cast-iron skillet with plenty of bread and butter to soak up the broth. Another choice is the white Côte du Rhone from Domaine de la Becassonne. While it doesn’t have any sweetness, he said, “like many of the Rhone whites, it has a kind of mouth feel and a higher viscosity that works well with this kind of spicy dish.”

With Whidbey’s local Penn Cove mussels, Jurriaans suggested a crisp, clean white without too much oak—the Joseph Drouhin from Macon-Village in the Burgundy region of France. This 100% Chardonnay is fermented in all stainless steel. Jurriaans likes to recommend this wine so people can see that Chardonnay doesn’t have to be buttery and oaky; it can be versatile.

Jasper Hein is one of the Prima Bistro bartenders.  (photo by Chris Korrow)

And the best wine to drink with Prima’s burgers? Jurriaans made it simple. “Pretty much any red we have goes well with a burger.”

Somewhere in between red and white, our conversation shifted to that delicate pink wine: Rosé. “To me and some of the friends I drink wine with—Rosé is like religion. When I discovered dry French Rosé, it changed my life.” A wine best known for summer drinking, Jurriaans drinks Rosé all year round. He said that the Campuget from the Costieres de Nimes appellation in the Rhone Valley, a Syrah and Grenache based Rosé, is amazing every year.

He explained that further south into the French region of Provence, Rosés might get some oak treatment so “you’ll find they are more substantial, have more depth and are even age-worthy. The Côtes de Provence, Domaine de Rimauresq ‘Cru Classé’ is a good example of this.” Jurriaans’ list of Rosés expands in the summer and, for the last two years, has included Prima Pink, a locally made Rosé—one of three wines made for Prima Bistro by Whidbey Island Winery.

According to Jurriaans, Greg Osenbach of Whidbey Island Winery makes some of the best wine in the state of Washington. Besides the Rosé, Osenbach annually blends a custom Prima Red and Prima White for the bistro. The blends change every year and are meant to be versatile. Local artist Dave Gignac creates the labels. Expanding further on this local collaboration, Jurriaans noted the symbiotic relationship between the bistro and their downstairs neighbor. “When people like this wine and ask me where they can buy it—I send them downstairs to the Star Store!”

Next time you stop in for a meal at Prima Bistro, spend some extra time reading the wine list. Ask your server for suggestions and find out what’s new on the list. Notice the color and the scent of your wine and pay attention to how the flavor blends with the taste of your entrée. This will add a new dimension to your meal and give you a glimpse into the mind of a chef. “The Prima Bistro wine list is an evolution,” Jurriaans stated. “Wine is a subject that you can never learn enough about. I am still constantly learning more.”

Prima Bistro, open seven days a week, sits atop the Star Store Mercantile and can be accessed from both First and Second Streets in Langley. It’s popular with locals, so yes, you are wise to make a reservation even on a winter’s weeknight. “Like” their Facebook page to keep up with daily specials, special wine and beer events, and other news.

Christy Korrow lives in Langley and is employed full-time in publishing. She and her husband Chris are co-developers of the Upper Langley Cohousing Community, a 16-household neighborhood on 10 acres in the city limits of Langley. www.christykorrow.wordpress.com.