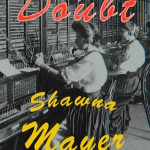 The Short Stories were a SMASH

Chris Spencer’s “Ninth 100 Word Short Story Smash” was held  on Wednesday, Oct. 28 in Zech Hall at WICA with a “rapt audience” of observers, onlookers and contestants cheering the “rhetoricians” who elucidated the submitted short stories, using their sublime elocution and no deep-rooted fear of public speaking.

The winners, and their stories, were:

Honorable Mentions went to Cam Castle for “Grocery Store Parking Lot-Chicago” and Dianna MacLeod for “A Socio-anthropological Reconstruction of an Island Society on a Land Mass Located in PanPacific Grid K-12 Submerged in the Universal Deluge of 2090 and Re-emerged in 2120.”  (Fortunately for MacLeod, titles were not considered a part of the “100-word maximum.”)

Lee Seymour was getting the needle.  He’d been on death row 12 years and his time had finally run out.

“Any last words?” He was asked.

“You are killing an innocent man!”  He glanced at his victim’s father who glared outraged indignation at Seymour.

At 12:01 the signal came and the lethal chemicals were pumped into Seymour’s’ veins.

It rang three times before a stunned guard picked it up.

A look of confusion crossed the guard’s face, then he smiled strangely.

He faced the witnesses and said, “Wrong number.”

Dan heard Santa flying in above, so……

Dan called the cops to help but they arrested Santa for flashing.
Santa was angry, so…….

Dan wrote Santa a letter
To explain all the bother
“I called the cops on you,”
Signed, Damon (who was his little brother)

My Fairy Tale
By Les McCarthy

Snow White had it made!

Seven boyfriends—Sleepy, Sneezy, Dopey, Grumpy, Bashful, Happy and Doc. Not great names and albeit short in stature, but she was adored by industrious, doting miners in a one bedroom, cozy cottage deep in the woods.

A girl can dream. Right?

But, in my fairy tale they would be tall, dark and handsome with names like Hunky, Sporty, Funny, Wealthy, Smarty, Arty and Chef.

The EMT pounded on the car window. Windows rolled up, doors locked, 90 degree heat. An elderly woman was slumped over the steering wheel.

Frantic, he got the door open. “Lady?”
“I’m dead.” she moaned.
“What?”
Her hand was to the side of her head, dripping ecru-colored goo.
“My brains.”
That’s when he saw it.
The Pillsbury Poppin’ Fresh biscuit mix exploded in the heat, hurtling the metal lid against her head, accompanied by a gob of melting dough.
Her constant, intense fear of being killed by a stray bullet in a drive-by shooting had, in her mind, been realized.

Pottery shards, glass fragments, and strips of painted canvas indicate that “Lang-Lillians” valued artistic expression. A corroded bronze dog and a recovered sign “The Doghouse T…” (Temple?) indicate a place of worship to canines was at one time erected but later abandoned. Abundant small skulls indicate a native diet of rabbits, perhaps hunted by the inhabitants’ revered dogs. Surviving entrails reveal two predominant beverages, one derived from grapes, one from tropical beans. Did Lang-Lillians share the Clintonians’ belief in fairies? A surviving fairy booklet and the close proximity of the two groups suggest the possibility of a common faith-based system.