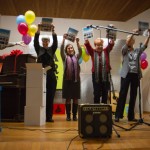 The WLM Launch Party in Photos

As part of the lively celebration at the Whidbey Life Magazine Launch Party, unveiling the first print issue of WLM, publisher Sue Taves announced, “This is the part where the doctor turns around and says “Congratulations, you have a baby…magazine.”

The key management team of WLM: publisher and managing editor, Sue Taves; webmaster and graphic designer, Jan Shannon, and co-editor and graphic designer Claire Moore, were joined by the WLM writers, photographers, contributors and many community supporters for this event.

Co-founders Jan Shannon and Sue Taves mingle as the party gets started. (photo by David Welton)

WLM event coordinator Meri McCormick pulled out all the stops to celebrate the occasion. The historic Freeland Hall and stage were decked out, the room was packed with enthusiastic WLM supporters and the food, music and cake demonstrated some of the artistry of Whidbey’s creative community.

The colorful creator of the paper flower centerpieces, the luminous Peggy Moe (photo by David Welton)

In response to comments from Sue Taves, “it takes a village to raise a magazine, “MC Marsha Morgan kicked off the evening with her original lyrics in a “thank you” song to the many, many people who work on—and have worked on—WLM. Eileen Soskin coaxed the old stage piano through this song with just the right tempo. (See more notes on the village at the bottom of this article). To see the words to the “thank you” song, read this short article with the lyrics here.

Marsha Morgan, MC, sings a long list of thanks for everyone who made WLM and the magazine a possibility. (photo by David Welton)

John Auburn of J.W. Desserts outdid himself with a champagne bucket and bottle that was a chocolate cake. The accompanying tasty lemon cake was a perfect counterpoint.

Copious amounts of delicious food were prepared by Laurel Davis of 2nd Street Wine Shop, and Lisa Carvey of The Braeburn, both in Langley and Vicky Brown of Little Brown Farm. (photo by Vicky Brown)

“Apricot Cilantro Prawns” and “Curried Chicken stuffed Medjool Dates” prepared with care by Laurel Davis were served with gusto by the South Whidbey Commons servers. “Gingered Apple Beet Salsa,” a Charcuterie Board and fresh cheeses prepared by the culinary talents of Laurel, Lisa and Vicky, were among the many choices available at the food table. The team of enthusiastic servers of the South Whidbey Commons were guided by Gretchen Cole and Katy Wilson-Albert.

Little Brown Farm pheta and olives and other culinary delights as they looked before the party started. (photo by Vicky Brown)

Early on in the evening, WLM Publisher Sue Taves announced that WLM has created a grant program and will set aside 10% of the proceeds from sales of the print magazines to fund this grant. The first grant was awarded to Island Strings and Island Strings co-founder Linda Good accepted the big check.

Gloria Ferry-Brennan (right) shows off the custom-designed and custom-made performance dress created especially for her by Brenda Lovie. (photo by Vicky Brown)

A sketch by Barbara Barry; Gloria performs on her violin with Eileen Soskin accompanying her on the piano (sketch provided by the artist)

Whidbey Life Magazines can be purchased for $5 and are available at many island locations. You can find more information on the WLM order form.

Many thanks to the “village”

There are so many more thanks:
Our business sponsors: John L. Scott in Langley, Whidbey Vision Care and the Whidbey Island Arts Council
Our Indiegogo Contributors-see the list on our “Thank you” page
Our advertisers who took a chance signing up for Issue #1 sight unseen
Our many readers, contributors, Facebook and Twitter followers who help spread the word about WLM
Whidbey Island Local Lenders  for helping us with our start
Our anonymous donors-our many, many thanks
The forming team of Whidbey Life Magazine: Sue Taves, Jan Shannon, Patricia Duff and Kim Tinuviel
The original Whidbey Art Source Advisory Group of 2012: Laura Blankenship, Anastasia Brencick, Robbie Cribbs, Diane Divelbess, Bridget Fischer, Zia Gipson, Robbie Lobell, Paul McClintock, Claire Moore, Sharon Shoemaker, Michael Stadler, Lori Tate and Sandra Whiting