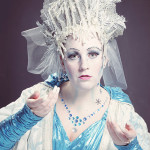 Creator and choreographer Asharaine Machala has been hard at work to re-stage her 1998 production, which is based on Hans Christian Andersen’s coming-of-age fantasy—a story that celebrates the strength of love.

As the story goes, the Snow Queen is queen of the snowflakes or “snow bees,”and she maintains her palace and gardens in the Scandinavian lands of permafrost. “There are strong archetypes at play here,” Machala said.

The enigmatic Snow Queen (played by Amy Lehman) is a complex character. “She is not a villain, but an elemental force,” Machala said, “And the reindeer (played by Madyson Hunter) is the beat; the reindeer controls the heartbeat of the Earth,” she added.

The Snow Queen is successful in using her cold beauty to abduct a boy named Kai (played by Zane Vanderwood) after he falls victim to the troll-mirror, a magical mirror that splinters glass fragments of ugliness and evil on all those who come under its spell. The Snow Queen promises to free Kai if he can spell “eternity” with the pieces of ice in her palace.

When Kai’s disappearance is discovered, the people of the city believe that Kai drowned in the nearby river. But Kai’s best friend Gerda (played by Faith O’Brochta) is heartbroken and goes out to look for him. This is her quest. Gerda and the reindeer embark on a perilous journey to the north to the Snow Queen’s palace. A woman tells the reindeer that the secret of Gerda’s unique power to save Kai is in her sweet and innocent child’s heart.

Much of the production design for this Whidbey Island production is inspired by the story’s Scandinavian setting; it is transformed into an epic quest with the use of that region’s classical composers, including Dag Wirén, Jean Sibelius, Edvard Grieg and Carl Nielsen. Scandinavian folk art inspired the production’s visually stunning costumes and its painted backdrops. Setting the mood with beautiful music and sets, Machala makes magical use of WIDT’s best dancers and Whidbey Island community actors to create a heart-warming theatrical journey the whole family can enjoy.

Whidbey Island Center for the Arts is located at 565 Camano Ave. in Langley.