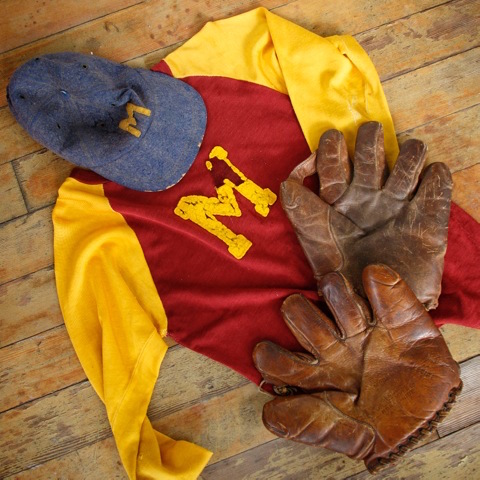 Just as baseball was the universally acclaimed national pastime during the last century, on a smaller scale softball was the pastime of Whidbey Island. As early as 1913, the four Mackie brothers—Theodore, Peter, James and David—cleared and leveled the sandy ground at Maxwelton beach to provide a playing field for ballgames. Dave Mackie passed away in 1939 and his heirs donated the land to Island County to create Dave Mackie Memorial Park.

Maxwelton’s ballgames anchored community life during the summer. Families and friends picnicked on the grass to watch the contests until dusk. Before too long, someone had the bright idea to illuminate the field to extend ballgames into the night. Public funds were sparse after the Great Depression and World War Two, however, so the community pitched in and did it themselves. Clayton Mackie and a party of volunteers rigged a device to transport and raise the log light poles and electrician Payton Rudd donated his professional services to wire the poles.

The lights were dedicated on the Fourth of July, 1947 and the community was proud of the smallest lit ballpark in America. The hat was passed after each night game to fund the electric bill.

The next step toward the big leagues was a covered grandstand to gather spectators and to shelter them from the elements. Once again the neighbors stepped up to the plate; a team of helpers from the Maxwelton Community Club and Woodland Hall erected the structure at the south end of Maxwelton Road, using donated lumber. Foul lines and outfield fences, located out past the light poles, were installed. Construction was completed in November of 1949 and the arrival of a “major league” quality arena fostered fierce competition.

Richard Grubb with his 1950s Maxwelton jersey and his father’s ballcap and glove from the ’30s. (photo by David Welton)

A surprising number of middle-aged and older players, from both Little League and adult recreational teams, still live nearby. They gathered recently to reminisce about the good old days.

Doug Green recalled the pre-television-1950s as a “transition era. Communities did stuff together at churches and gathering places,” he said. He remembers bobbing for apples at Woodland Hall.

Ralph Green and Parker Wildes, a barrel-chested first baseman of Ruthian proportions, were known for prodigious home runs that occasionally landed in the surf beyond the short right-field fence. Richard Grubb claimed “the outfielder had to wear hip boots.”

Lanny Workman, right, shows off the reminder of days gone by.   (photo by David Welton)

The center fielder had to dodge the light poles that were 20 feet inside the outfield fences. There were no ground rule doubles, so “if the ball hit the pole, you had to play it off,” said Green.

“There was a particularly spirited rivalry between Clinton and Maxwelton,” Bob Miller said, “with heated games on the Fourth of July.” Local teams from Midvale, Langley and Freeland hosted games at their own fields. A game in Coupeville made for a greatly anticipated but long road trip in those days. Regional teams from Mukilteo and Seattle traveled to play in the crown jewel of the Maxwelton Valley.

Little League, adult recreational and pickup games were played there, as well as “hens and chickens” games that pitted single women against their married counterparts. County commissioner Helen Price Johnson grew up in Maxwelton and played in a co-ed league as a child.

The Cross Country Store and gas station, owned by Miller’s grandmother, Julia, and located across the street from the ballpark, stayed open late to refuel hungry players with candy and soda pop.

In the summer of 2011, plastic outhouses were placed temporarily alongside the lean-to storage building next to the grandstand in anticipation of the Whidbey Island Triathlon. Sometime after midnight they were vandalized and set on fire. Although the fire was promptly extinguished, the storeroom was destroyed and the stands were damaged.

Bugs Bunny mural. (Does anyone know more about its creation?)    (photo by Steve Marx of Island County Public Works)

Cleanup and demolition revealed a long-forgotten mural, concealed on the first-base side, that featured a 1939-style Bugs Bunny admonishing people to “Keep your park clean, no alcohol allowed.” None of the players from the 1950s remember this work of art. The creator and the date of this drawing remain unidentified, but some speculate it was painted by Carolyn Cook, sometime between 1960 and construction of the attached storeroom.

The economy struggled in 2011 and county resources were once again strained so, in the grand Whidbey tradition, work parties—comprised of parents of South Whidbey Crab Little Leaguers—rebuilt and painted the grandstand and modernized the dugouts.

Steve Marx, Assistant Director of Island County Public Works has pointed out that most older wooden ballparks have fallen to decay or fire and no longer exist in the United States. Nevertheless, the grandstand at Dave Mackie Park still remains—a physical reminder of the community spirit of Whidbey Islanders.

Image at top: Richard Grubb’s 1950s Maxwelton jersey and his father’s ballcap and glove from the ’30s.   (photo by David Welton).

David Welton is a retired physician and staff photographer for Whidbey Life magazine. He thinks and processes information visually and, therefore, [he says] he is a man of few words with limited verbal communication skills.

“Then…and Now” is an occasional series of historical Whidbey Island photographs paired with contemporary images by David Welton. If you have a “Then…and Now” story to share, contact info@whidbeylifemagazine.org.