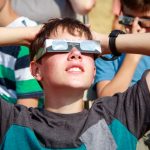 There Goes—Here Comes the Sun

The great American solar eclipse will cover our nation like a sash on a beauty queen on Aug. 21. The last time this phenomenon extended from the Pacific to the Atlantic coast was in 1918. Oregon is expecting an overload of visitors to view the eclipse in its totality, but on Whidbey Island, only 90 percent of the sun will be blocked by the moon. Nonetheless, it’s worth observing to see the sun’s corona, the part of the sun that Earthlings get to see only during solar eclipses. The celestial show begins at 9:08 a.m., will reach maximum darkness at 10:20 a.m., and ends at 11:38 a.m.

Roger Kennedy, a retired space scientist and NASA volunteer, talks about the need to safely view the eclipse, being mindful not to burn your retinas. With approved glasses, the sun looks like an orange ball, he says. Unsafe glasses show the sun as a white or green ball and shouldn’t be used. Kennedy and his wife Linda are touring Sno-Isle Library sites in Snohomish and Island counties and educating the public about the upcoming solar eclipse and the science of the sun. (You can view a schedule of eclipse-related programs hosted by Sno-Isle Libraries, here.) On Aug. 12, Kennedy spoke to a crowd of about one hundred who were gathered in Clinton at the invitation of the Freeland, Langley, and Clinton libraries.

Participants at a program hosted by the Freeland, Langley, and Clinton libraries practice wearing protective glasses. (Photo by David Welton)

“Here in Washington, you’ll see a black circle on the sun and a little edge of the sun, like a crescent moon, but it will be really bright,” Kennedy says. “It’s dangerous to look at with binoculars or through an unfiltered telescope. That’s where blinding comes in. As the moon moves further off, you get more sunshine. You can keep looking, but all of a sudden, you’ll see white dots, and within ten seconds, you’ll be permanently blinded. We want to tell people it’s safe to look, but be prepared.”

At Saturday’s event, Kennedy said the glasses can be worn over prescriptive lenses. He stressed the importance of wearing them when looking at all phases of the eclipse.

Freeland Library patron Lori Joyce looks forward to viewing the total eclipse in Madras, Oregon, where an estimated 2.5 million people are expected to see the day turn to night for about two minutes.

“I happened to see an astronomy magazine donated to the Freeland Library eight months ago, and the astronomy buffs sounded so excited,” Joyce said. “At that point, nobody in the general public was talking about it, so I did a little research. I had associated eclipses with the childhood experience of viewing a partial eclipse silhouette through a pinhole in a piece of cardboard—a very unimpressive experience. So, my enthusiasm is secondhand, and maybe astronomy buffs are overly impressed by these things, but I hope for great conditions in Madras, Oregon, unless wildfires create smoke. I hope to see a colorful corona and to be impressed by the experience of day turning to night. I think I also am prepared psychologically for a crazy, crowded environment!”

Science is one lens through which to view an eclipse, but there are others. Eclipses are associated with important shifts in history.

“Nations, like stars, are entitled to eclipse,” wrote Victor Hugo, author of “Les Miserables” and “The Hunchback of Notre Dame.” He said, “All is well, provided the light returns and the eclipse does not become endless night. Dawn and resurrection are synonymous. The reappearance of the light is the same as the survival of the soul.”

A participant in the Sno-Isle library program improvises a sun visor and dons her eclipse glasses at the Clinton Progressive Hall. (Photo by David Welton)

Few could argue that our nation is undergoing shifts that sometimes feel like an eclipse. The upcoming national eclipse is “A call to bring out the shine within each of us,” says Gretchen Lawlor, an “experiential” astrologer who has practiced for more than 25 years and is well-known in certain island circles. “Eclipses have been recorded and studied since at least 1200 B.C., especially their influences over the fates of countries and their rulers.

“Astrology says we are part of this bigger thing, we’re not separate. We are not going to continue as we were. It means a radical reorganization; we have an opportunity to function from a heart-centered consciousness. You could say this holds a potential if millions of people are in conscious alignment.

This young man could see the next total solar eclipse in the United States, which will take place on August 12, 2045. (Photo by David Welton)

“In the moments of witnessing this eclipse, both as individuals and as a nation, we are being invited to let go of old stories, habits, or involvements that no longer serve us. It’s time to take up a fresh relationship with the light and the sun; to consciously reset the course of our lives. And to reclaim our own sovereignty—our right to govern ourselves.”

Wherever your beliefs lie, Kennedy says the upcoming light show “Could go down in history as the most-watched eclipse ever.” He estimates that about 236 million people have access to watching as it travels along its path. “We’re part of the NASA team in Madras and will be broadcasting on the NASA livestream channel,” he adds.

If you know of other eclipse events on Whidbey Island, please add them in the comments.

Read the other story published this week