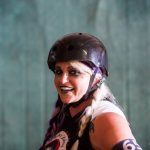 They Walk Among Us, but on Saturday, They Skate

Your neighbor is there every day, greeting you with that same smile, child in a stroller, beagle on a leash, passing your garden. Funny how much she looks like the woman flying around the track at the Roller Barn. The one with the tattoos, helmet, mouth guard, and sleeveless tee, leaning, twisting, and shoving her way through a crowd.

Could they be the same person? Did your mild-mannered neighbor join an outlaw biker gang? Is she out to bust up the town after she skates?

Publicity is a community effort: Pace Picante (Erin O’Connor) gets a hand from her friends before the bout. (Photo by William Walker)

“We get that a lot,” laughs “Adelita Beatah,” the public relations chair for Whidbey Island Roller Girls. When she’s not skating, Beatah sheds her derby name and persona and becomes Monica Lopez. She serves the community as a case manager and advocate for homeless housing.

“People think we’re a bunch of beer-drinking hooligans. That’s just not true. We build character and empowerment among women. We come from everywhere in the community. We’re teachers, active-duty Navy women, and at-home moms. We are Chamber of Commerce members. We volunteer everywhere, supporting local charities and especially our hosts here at the Roller Barn, the Boys and Girls Club.

“We even have rules about how we behave in public. Like: No drinking in team gear.”

Introductions are an event in themselves. (Photo by Jeff Jackson)

Derby women represent a vast range of ages and body types. Maybe they didn’t know it when they joined, Beatah says, but they all know now: “We’re athletes. Every one of us. No matter what we look like.”

Before a Saturday bout at Oak Harbor’s Roller Barn, there’s a unique paradox afoot: skaters’ affection for each other, even for the competition, is about to morph into unbridled aggression on the track.

Derby names lay it right out there – shocking or funny, sweet or unprintable, from the far side of that chasm that separates your sweet neighbor from the terror on wheels you see at the bout. Machete n Meatballs (Lauren Maynard). T-Wreckz Yo Face (Tracie Bryant). Hippo Pottymouth (Sandra Kimberling, who skates for the competition). The local women circle the track sharing hugs and high fives with their opponents: Overbeaters Anonymous.

T-Wrecks disarms with a smile. (Photo by Jeff Jackson)

Ginger Poundcake (Teresa Warden-Wollas), a mom of two teenagers, braids a teammate’s hair at trackside and tells how she got involved. “My son talked me into it. ‘Mom, you really should try it.’ I said, ‘Ummm, I’m not so sure.’ He said, ‘Mom. Really. You have to do this. Maybe you’ll, uh, get all that stress out.’” Ginger flashes a grin. “I think he wanted me to be mean on the track so I’d be nicer to him at home.”

It’s all about love for the sport. Referees, officials, announcers, and EMTs all volunteer their time for  derby. (Photo by Jeff Jackson)

“Our last bout, the whole pack of skaters fell at once. All eight of them collapsed on my ankle. Three broken bones. Surgery, metal plates and screws in there. I’m all good.”

She’s matter-of-fact about the injury, the surgery, the coming months of rehab. The pain only creeps into her eyes when she’s asked about a return to the team, skating again with her sisters. “All the doctor said was ‘maybe.’ I really hope so. Derby has given me so much. I was active-duty when I joined, and now I’m out of the Navy, I have a husband and a child. I still want so much to be a part of it.”

You get the feeling that this club changed Bruizy’s life. What’s it all about, this sisterhood, this sport that arouses such passion?

Derby rules and play are simple on paper. The oval course features two straightaways 35 feet long and 15 feet wide, connected by sweeping turns. Four skaters from each team jostle in the starting area, and at the referee’s whistle, a fifth – the “jammer” – from each club attempts to break through the other club’s four blockers. The jammer tallies points for every opposing player she passes.

This is no brutal pro-wrestling relic of the 1970s. No elbowing, grabbing, punching, or tripping is allowed. There’s a penalty box for offenders. Jamming and blocking are about hips, shoulders, teamwork, and agility.

Whidbey scores first, tallying four points as jammer “Wild Sockeye” (Whitni Schurr) darts through the pack. The home crowd loves it, but the Overbeaters take control. By halftime, the visiting team, which is made up of plus-size skaters who call themselves “fatletes,” leads by more than 100 points.

Wild Sockeye (L) sees an opening in the pack. (Photo by Jeff Jackson)

As the teams leave the rink, Whidbey’s “Chefzilla” (Mary Arthur) rolls by with a grin. “Am I having fun? It’s always a good day when you’re playing derby!” Jerking her head toward the scoreboard, she adds, “In spite of the score.”

Whidbey looks stronger in the second half. They skate with precision, tap dancing along sidelines and scoring with confidence. But the visitors won’t let them close the gap, and the 100-plus margin remains as the final seconds tick away.

When the bout is over, nobody’s down about it. Both teams skate through high fives and embraces from each other and from cheering fans. Everyone’s smiling. Overbeaters coach “Thurston Gore” (Aaron Managhan) excuses himself from an interview: there’s a group photo shoot, both teams, mingling, hugging, mugging for the camera.

Skaters and coaches from both teams celebrate after the bout: Strong. Focused. Together. (Photo by Jeff Jackson)

When Gore has a minute to talk, he passes the praise on to the skaters he coaches. Overbeaters Anonymous draws more than 100 women from around the region. Most belong to other clubs. Some are current or former Whidbey members. “We love coming here to Whidbey. It’s such a positive place, and it’s an honor to coach this team. I feel like I’m just along for the ride. We never practice, since we’re from all over the Northwest, and we bring a different group to every road bout. But this team plays like they’ve been practicing forever. They’re that good.”

Adelita Beatah stands straight and tall on her skates, telling a stranger that she weighed more than 300 pounds when she joined the club. She spent her first practices holding on to the wall all the way around the rink and needed a railing to get up when she fell. That same woman now skates with pride and confidence: she’s lost well over 100 pounds and gained immeasurable self-esteem.

ChefZilla’s partner Jim wipes the sweat from her face. (Photo by Jeff Jackson)

Overbeaters coach Gore says, “Derby can be empowering for anyone who plays it. It’s a great way for people who may not have played traditional sports growing up to get the benefits of confidence and team dynamics.”

We hear “empowerment” in political settings, meaningless in far-off partisan arguments. But here on Whidbey, when ten women skate around a track, and do it with love and power, it brings the meaning home. It’s about a woman taking control of her life. It’s about pride and confidence.

Club founding member and current Women’s Fast Track Derby Association liaison “Glory S” (Kristen Adams), with her neon green hair and incandescent smile, exudes pride when she talks. “I’m not the only original. There’s one… and one over there… and there’s even one skating for Overbeaters,” she says as she points out the pioneers who got WIRG off the ground in 2010.

Trackside fans give the Roller Girls some postgame love. (Photo by Jeff Jackson)

“We want to keep growing. Everybody’s welcome,” she adds. Fresh Meat Roller Derby Boot Camp is on Sundays from 5 to 7 p.m. for women who want to be part of it. The next 10-week series runs from September 20 through December 20, 2017.

After the bout, Ginger Poundcake is moving, well, gingerly, as skaters make their way to the dressing room. “I’m not hurting. Just tired. It’ll hurt two days from now, when the adrenaline wears off. You can’t help getting a little black and blue.”

When asked how she feels about her bruises, she says. “Bruises? Ha. Those aren’t bruises. Those are derby kisses.”

Makes sense. There was a lot of love in the air.

“The Smiling Butcher” (William Walker) is a writer who lives in Oak Harbor. His first novel, “Diamonds and Dirt,” will explore parents’ obsession with sports and their adulation for abusive coaches. The Butcher follows the Mariners and Yankees, gets lit up about our judicial system’s lack of support for victims, and keeps you up-to-date on all of it at www.playininthedirt.com.