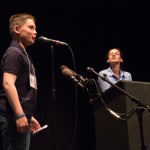 The Whidbey Island Writers Association (WIWA) has encouraged and recognized writing talent among Whidbey Island students through the ‘Celebrate Writing’ Contest’ since 1999, but this year, five nonprofit and for-profit organizations collaborated to recognize and support young writers.

After volunteer judges Jim Carroll, Mureall Hebert, Lisa Kois, Jo Meador, Helen Sears and Katie Woodzick evaluated and provided personalized feedback on each entry, Whidbey Children’s Theater (WCT) board member Carolyn Tamler tallied scores and notified winners. It was Tamler who encouraged WIWA to collaborate with WCT, where winners read their work aloud at an award ceremony on Saturday, May 30. Before the presentation, WCT staffers Michael and Kathryn Morgen coached winners in performing their work, making both the stage and microphone feel like much friendlier places.

Photographer David Welton represented Whidbey Life Magazine, the third organization to participate in this collaboration, and took the photos you see here as winners worked with Michael and Kathryn. Videographer Robbie Cribbs represented WhidbeyTV, the fourth organization, and recorded winners as they presented. Annie Horton and Mary Rose Anderson of Whidbey Air Radio represent the fifth collaborating organization; they will record winners as they read their work at the KWPA studio in Coupeville later this month.

Colin Diamond reads “Billy Bob” with Kathryn Morgen coaching from the side.

In the middle of the meadow

You can see clear,

The plant is sprouting

In the sound of a beat in a heart,

Is a tree about to start.

The tree is two feet

But yet it makes a noise

The leaves and the roots seems all old,

Yet the tiny sapling is new

And is exactly pure gold.

When my cats are together
They don’t want to play.
They fight with each other,
Then they’ll go away.
They hiss and meow and spit and growl.
They fight like wolves that like to howl.
There is one more thing that I’d like to say.
There are two places that
My cats will stay.
These two places are both on my bed
On different sides of my legs and my head.

Sticky ones, real ones

Jason ran. He tore through the brush, looking for a way out of the forest. He heard a moan coming from behind him. A sudden burst of adrenaline rushed through him, pushing his battered and bruised body to its limits.

He didn’t see the hill. He crashed through another bush, only to find himself plummeting down the steep incline. There were no trees or roots or anything to grab onto. It was as if god himself wanted Jason dead. When he finally reached the bottom, he looked back up but saw nothing.

He got back up, and found that his leg was in extreme pain. Jason half­ran, half­dragged himself out of the small clearing. That’s when he saw it. The huge group of the Runners careening towards him. He pulled out his pistol, and shot one right in the face. It started staggering and slammed into the one next to it, setting off a domino effect, knocking down almost all of them.

Jason dashed towards the Runners, knowing that they must have come from a nearby town. Maybe there were survivors. Jason knew that this was a long shot, as the Runners were extremely good at taking out whole cities. He found out from the news that they had destroyed New York City. After that, it had been mere minutes before they struck his hometown of Chicago. He managed to escape by hiding in the annex until most had left, but the rest of his family had not been so lucky. Before he left, he took a backpack full of supplies, including the pistol, food and water.

Jason knew it was bad to get caught up in memories, even though they had taken place only a few days ago. He must focus on running, and he could see lights from the rapidly approaching town. Now he knew there were survivors. He had hope. Jason sprinted as fast as he could to get to the town.

He arrived ten minutes later, tired and out of breath. He was correct; there were survivors, some peering out through the windows, some standing out on their porches holding shotguns. Jason noted that many were aimed at him.

“Is you one of dem runners?” A gruff man asked, “Cause imma shoot your face off if you are.”

“No! Of course I’m not a runner!” Jason huffed, nearly out of breath from his desperate race through the forest.

“Is you sure? Cause imma shoot your face off if you isn’t.”

“I am positive. You also just repeated yourself.”

“Is you gettin’ smart with me? Cause imma shoot your face off if you are.

“Why don’t you come inside then? Cause imma shoot your face off if you don’t.” The man replied.

Jason followed the man and a few other people into a small cabin near the front of the town. It was cozy and snug inside, and there was a roaring fire in the fireplace. Jason noticed that there was a bed in the corner, and he wished he could just leap onto it and fall into a deep sleep.

But he couldn’t. He had to explain himself first.

“Tell us who you is and where you come from.” The gruff man told Jason, “or else imma­”

“Shoot my face off.” Jason interrupted, “I get it.”

Tyler King reads “The Runners” during the rehearsal session.

If you look far north you will see a much wrecked village, wrecked by war, some buildings badly damaged. By just looking at the village you could see some buildings were in livable conditions but the only water available was black and filled with leaches. In this village lived Cleo Santiago. Cleo did not play all the games the other boys did in the village like dodgeball and wrestling. He liked to help his mother. Their home was not in one of the most suitable buildings. The gate was wrecked, creaky, unstable, leaning in the wind, moss devouring it like a green curse. The door rusty and off its hinges, was lying on the ground. The windows were cracked, shattered and sad. The house had no lights. Cleo however was happy in his home. Near the afternoon Cleo was helping his mom do the dishes and hang the clothes, never sighing or looking sadly at the floor. After he was done helping his mother do the chores, he asked his mom if he could go to the library, mom saying “yes”, Cleo packed his worn out bag and hiked down to the library.

The library was a wrecked, red brick building with holes too small for a person to climb in or out but large enough to be noticeable. Big metal vaults were for reading in the library whenever people needed a quiet place to read. The shelves were made of dark spruce wood but were very smooth and the many books on the shelves were colorless, some burned during time of the Great War. Most people didn’t even venture into the library anymore because it was a reminder of war. Still Cleo was happy in the library and soon he arrived.

After returning his books to the shelf, he got five more books down off the shelf and brought them into a cramped reading vault. Cleo was such a great lover of books, time passed quickly like falling grains of sand slipping through fingers. In fact time passed so quickly for him that when he was done he got out, looked at the big old grandfather clock and the clock struck midnight with a great banging of twelve great dongs. Suddenly all the lamps in the library turned on, all the books flapped like great birds of flight, the desks began walking, and shelves began talking! Cleo was running to the doors screaming but the doors wouldn’t open.

He was stuck with these odd creatures that surrounded him, they were everywhere. He sat down one hand on his face, he wept. He wept for a while until he heard a calm voice behind him say, “Why do you weep with such sorrow”? Cleo looked down at the floor and said this, “I have read so long that I have died, just like my dad in the war”. The bookcase gave a little laugh and said, “You have not died, for this is real! Here listen to me speak, I can feel pain and you can too, can’t you?”

Cleo opened his eyes panting and heard his mom say, “Oh Cleo you’re awake, I was getting worried!” Cleo answered to his mom asking what had happened. His mother told Cleo how he had fainted while doing his chores. She paused and said “Cleo, do you want to go read a book in the library?” Cleo answered, “Yes”. He packed his worn out bag and hiked down to the library. After returning his books, he got about five books down off the shelf and brought them into a cramped reading vault.

Cleo was such a great lover of books, time passed quickly like falling grains of sand slipping through fingers. In fact time passed so quickly for him that when he was done he got out, looked at the big, old grandfather clock and the clock struck midnight with a great banging of twelve great dongs. Suddenly all the lamps in the library turned on, all the books flapped like great birds of flight, the desks began walking, and shelves began talking! Cleo was running to the doors screaming but the doors wouldn’t open…the dream was real. From that day on Cleo never told anyone about the library secret and never thought of a book the same way again.

Richie Hinojos makes a point during the warm-up session

Everyone gets loose in practice