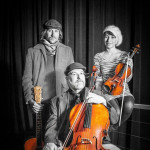 Three Cent Stamp: This Trio Creates its Own Special Sound, Performs on Friday and Saturday, March 21 and 22

“Our music is not defined by a genre. We put together classical, jazz and our own compositions and have created our own style of music. When we play together, it’s just fun!” So said the members of Three Cent Stamp—James Hinkley, Levi Burkle and Gloria Ferry-Brennan—when asked to define their music.

The concert will provide a preview of a CD they will be recording the week following the concert in the studio of Robbie Cribbs.

These impressive musicians come from three generations. Hinkley, who plays cello and was responsible for bringing the three of them together, is 56. Burkle plays guitar and is 37, and Ferry-Brennan, who plays violin, is just 17 with a year to go in high school. Playing on the concept of “three” suggested the name for the group, Burkle said with some whimsy in his voice: “We were searching for a name; there are three of us and we just wanted to be a stamp we can use now and then.” He added, “We didn’t want to be an ordinary stamp that’s used every day.”

The trio started with Hinkley and Burkle in Montana. After a series of negative life experiences left Hinkley broke and without the cello he’d played for many years (he’d had to hock it), life turned around for him in Montana when he went to a jazz club to listen to some music. He heard Burkle and was “blown away” by his talent and creativity. A mutual friend introduced them and commented, “This guy plays the cello.”

“I didn’t know what a cello was,” Burkle recalled, “and I asked him if he’d show it to me. In North Dakota where I grew up, I’d never heard of that instrument.”

Burkle was fascinated by the large stringed instrument and hired the cellist to play a gig with him. Hinkley got his instrument out of hock, began practicing and got himself ready in just a week. “We had an immediate musical connection,” he said. “When we play together, it’s almost as if we’re telepathic.”

After playing gigs for three years, Burkle and Hinkley decided to tour. They first traveled to Burkle’s home state of North Dakota and then made a trip out west.

Thinking they might move to Seattle, they came for visit in 2003. An old friend invited them to come first to Whidbey Island. They came here—and stayed, but they’ve performed many times since in Seattle.

Hinkley and Ferry-Brennan met through the orchestra in 2006. Their first experience playing together was when pianist Eileen Soskin invited Hinkley to play with her and he invited Ferry-Brennan to join them.

Hinkley and Ferry-Brennan said they felt an immediate musical link. They were invited to perform at WICA in 2011 as part of the Local Artists Series.

That concert was the first time the trio played together, after Hinkley suggested Burkle join them for the second half of the show. “The very first time we were together, it was magic,” Hinkley recalled. “Now I’m playing with the two favorite musicians I want to play with.”

Ferry-Brennan said she believes both of her music partners are “true geniuses who constantly improvise and compose. And when we play together, it’s a true joy.” The music of Three Cent Stamp includes many of the compositions that Burkle and Hinkley have written.

In addition to their instrumentation, the Three Cent Stamp musicians sing together in three-part harmony. “Our music is fun-loving,” said Ferry-Bennan.

“Just like life,” Burkle said, “we’re all making it up as we go along. We like including humor in what we do,” he added. “We don’t want to get too serious.” Hinkley mentioned that, every once in a while, “Burkle makes a comment on stage that startles me, and I have to come up with a response.”

Hinkley and Burkle have each written hundreds (or maybe that’s thousands) of compositions, which have become part of the trio’s repertoire. The future of Three Cent Stamp includes making the CD, performing several concerts this summer and being part of the DjangoFest lineup this September.

To keep up with what they’re doing, visit the website for Three Cent Stamp at http://www.3centstampband.com/.