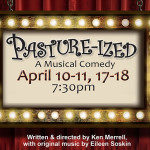 “Pasture-ized,” a Musical Comedy that is 100% locally-grown, will debut at 7:30 p.m. on Friday, April 10, with succeeding performances on Saturday, April 11 and the following weekend. Tickets can be purchased now.

With an original script written by Ken Merrell, “Pasture-ized” features music composed by Eileen Soskin with lyrics by Merrell and Soskin. Performances will be held at the Unitarian Universalist Congregation of Whidbey Island at 20103 State Route 525, north of Freeland.