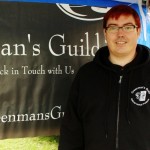 Toast to wellness with the Greenman’s Guild

Something new is brewing on Whidbey Island thanks to a line of flavorsome teas and all-natural remedies hand-crafted by the Greenman’s Guild.

The ancient Greek physician, Hippocrates, said to let medicine be our food and food be our medicine.  More simply put, grandma was right.  That steaming mug of tea with lemon and honey or bowl of chicken soup laden with garlic, onions, celery, carrots and parsley works wonders to help combat an assortment of ailments.  At the least, they will do no harm.

With cold and flu season just around the corner, the experts advise people to wash their hands more often, get sufficient sleep and drink plenty of fluids. Both Hippocrates and grandma would agree that it couldn’t hurt to also make room in the medicine cabinet, or pantry actually, for Mother Nature’s pharmaceuticals.  Some of these therapies, such as the aforementioned soup ingredients, come from the grocery store, garden or farmer’s market.  Others, as in the case of the hot tea, can be found on the website of Andrew Huggins, master herbalist and founder and proprietor of the Greenman’s Guild.

Huggins, who is a Coupeville resident and works full-time as a pharmacist’s assistant, became interested in natural treatments as an alternative to commercially produced medications and their potential for side effects.

“The body knows what it needs,” he said. “And I didn’t like the way mine felt when I took prescription drugs, so I decided to learn how to care for my own health, naturally.”

Huggins’ quest for knowledge led him to the School of Natural Healing in Springville, Utah, where he studied both preventative and curative medicine to earn his Master Herbalist certification.

After six years of tasting, mixing and perfecting his craft, Huggins found his calling in a cup of tea.  He made his first blend, Glad Tidings, as a school project and gave the minty infusion as holiday gifts for family and friends.

“People enjoyed the tea and wanted more.  They liked the flavor, but also how it made them feel, and wanted to know why,” said Huggins.

The Greenman’s Guild became the ideal conduit to channel Huggins’ desire to explain the benefits of lemon catnip, rose hips, raspberry leaves, mint and more.  While he cannot make claims about the purported health benefits of the herbs and extracts he uses because of USDA and FDA regulations, Huggins does love to teach his patrons about the vast world of natural health options.

“I can answer questions and make suggestions based upon my knowledge and own experiences.  And, I always encourage people to educate themselves and not be afraid to ask questions of their family doctor and of me,” he said.

Harvest Brew Mulling Spice is a guild seasonal favorite rich with the flavors of cinnamon, cloves and citrus.

In the evening and on weekends after his day job ends, Huggins continues his never ending quest to add new and better items to the guild’s line of soothing bath salts, powers, lotions, extracts and teas, including its Fennel Long Time, good for taming irritated tummies; The Bucks Stops Here, tea designed with coffee lovers in mind; and Mellow Meditation, good for calming the mind and body.  (This reporter is quite fond of the Greenman’s Guild Orpheus Boon, also known as “dream tea.”  The lightly sweet, lemony concoction is perfect for a relaxing nightcap.)

Huggins estimates that half of his business comes from the sales of his teas because, unlike some of grandma’s icky home remedies, Huggins’ edible goods, especially the teas, are delicious.  Each is carefully blended in small batches with only the highest quality, freshest ingredients.

Huggins sources some components of his products from reputable distributors, but grows what he can and obtains many others locally, including Mile Post 19 raspberry leaves, the main ingredient in his refreshing Raspberry Rose Tea.

Food writer Susan Wenzel believes in the power of locally produced food to fortify the health and well-being of both the individual and the community as a whole.