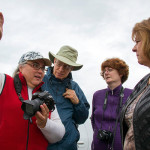 Langley photographer and visual artist Kim Tinuviel has introduced a new and unique way to see our beautiful island—with your camera and Whidbey Photo Adventures. These photos were taken during this guided photo adventure on May 25.

Kim’s inaugural tour group consisted of eleven guest photographers, nine from Whidbey, one from Seattle, and another from Salt Lake City. Photos from five appear below.

On the beach in Coupeville, Kim explains principles of composition, how to link exposure to focal point and the mystery of the histogram with tour photographers Doug and Moira Whidby. (photo by David Welton)

Photo Adventurers Rob Felding, Mary K Sanford and Moira Whidby on the beach at Admiralty Bay, applying techniques they have learned to their photography. (photo by David Welton)

Birds on a Pier  (photo by Doug Whidby)

Chairs in a Line  (photo by Doug Whidbey)

A colorful old truck grille peeks out of the bushes. From long experience photographing rusty old trucks, Kim knows the locations of many of these treasures!  (photo by David Welton)