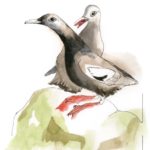 Tracking Whidbey’s Seasons with the Birds

These are the days of cool and crisp weather, yellow-orange leaves, and apples red and green. Autumn calls some birds to travel south while others remain and prepare for winter weather.

Naturalist Frances Wood observes bird migration to track the seasons. To mark the shift from summer to fall, Wood and her like-minded friend Linda Beeman waxed poetic to friends and admirers two days after the autumn equinox. Beeman read excerpts from her chapbook “Our Whidbey Year,” and Wood read from her book “Brushed by Feathers: A Year of Birdwatching in the West.”

“When I read her poetry, I thought she was a kindred spirit,” Woods said of Beeman’s way with words. “We’re both observers.”

“We thought we would begin in this most golden current season, the brink between late summer and early fall, when Gravensteins get turned into cider,” Beeman said.

During September, Wood notes, songbirds stop singing. “During the non-breeding season the section of a songbirds’ brain actually shrinks, making it impossible to sing, even if the urge arose,” she wrote. Swallows and warblers quietly fly south.

Wood noted that this time of year our regal great blue heron’s loose flight feathers show “gaps in its outstretched wings reminding me of a five-year-old’s toothless grin.”

Meanwhile, loons are arriving from Alaska and western Canada. They were sighted in Useless Bay and at Doublebluff Beach on the Equinox, according to Whidbey Audubon reports. In “Brushed by Feathers,” Wood notes that many of these large diving ducks known for their haunting calls stay through November before heading further south and that some remain all winter.

“For Thoreau, the loon’s call made ‘the woods ring with its wild laughter,’” Woods wrote in an October entry of her book. “Hearing the loon’s call makes me feel that all is right with the world, at least for the day. Like an overture setting the tone for an opera, the loon’s call announces the fall arrival of hundreds of ducks and seabirds into our bay.”

For Beeman, autumn means that “banana slug trails reflected/in afternoon sunlight/track to their underground hibernations.” She writes of a robin that met its sudden end: “late season robin that mistook/my front door for sky/fatal error that rendered/an elegiac offering.”

Since Whidbey Island is located in the Pacific Flyway, migrant visitors arriving in late September from the north include wigeons, ducks, coots, and “forty species of waterfowl,” along with red-tailed hawks, which join our resident birds.

As the cool, wet, windy weather moves in, we take comfort in warm soups, Beeman observes in her poem “Wind Storm”:

In addition to her books, Wood has designed Collectable Bird Cards, newly printed and packaged. She said that her husband’s baseball card collection featuring a photo of the player on one side and statistics about the player on the reverse side had triggered the idea for her cards. As a former elementary teacher and now grandmother, Wood said she is on the lookout for ways to connect kids with nature, and her Collectable Bird Cards meet that need. One side features her watercolor drawings; the reverse contains bird facts with boxes to check if the bird is seen or heard. One of the birds depicted is an American goldfinch, Washington’s state bird. While a bright yellow during breeding season, it molts and morphs to a dull olive color during fall and winter. Wood’s goal is to create cards for the top sixty of our area’s common birds.

The American goldfinch is our state bird. It loses its bright plumage in the fall (watercolor image by Frances Wood)

When asked about her favorite bird, Wood said, “it’s whichever one is in front of my binoculars.” But the truth is she is really into the island’s pigeon guillemot population.

“They are the only seabird that regularly breeds in the Puget Sound,” she said. “We have 26 colonies of about 1,000 birds. They are noted for their bright fire-engine red feet and mouth lining. They are entertaining to watch. Their eggs are laid in bluff burrows.”

Wood has organized a cadre of citizen scientists who regularly observe the black sea birds and complete weekly surveys of their observations. For more information visit www.pigeonguillemot.org.

To learn more about the many hats of Frances Wood, visit her Web page at www.franceswood.net. Her growing collection of bird portraits can be viewed at the Rob Schouten Gallery in Freeland and at www.robschoutengallery.com/frances-wood.

Besides her work as a realtor at Windermere Real Estate/South Whidbey, Linda Beeman is an award-winning poet and author of “Wallace, Idaho,” a chapbook describing the gritty life in the small silver-mining town where she grew up. For more about her, visit her amazon page here.

Image at the top: Pigeon guillemots have bright red feet and nest in bluff hollows (watercolor image by Frances Wood)