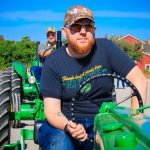 Like classic cars, two-cylinder John Deere tractors hold their appeal, and men with farming blood running through their veins, such as Bob Engle, collect them. Engle’s family farm on Fort Casey Road dates back to the 1850s, when his ancestors arrived to claim land as part of the Oregon Donation Land Claim Act.

The tractor that inspired this story: a vintage 1947 John Deere for sale on Maxwelton Road. (Photo by David Welton)

The Cascade Two-Cylinder Club (C2CC) approached Engle and asked him to hold a rally at his family farm. The club serves nearly 200 members throughout the northern part of the state, including Lynden, Sedro Woolley, Anacortes, Bow, and Whidbey Island. The nonprofit club, formed in 1993, is made up of collectors who restore and preserve antique John Deere farm equipment and who gather throughout the year for parades, plow days, festivals, and tractor pulls.

C2CC is named for its dedication to preserving the legacy of two-cylinder John Deere tractors, which were built until 1960. Paul Hieb, president of C2CC, says it was the club’s first visit to Whidbey Island. He trailered his 425 Hi-Crop from his farm outside Sedro Woolley, where he still grows potatoes, cauliflower, and broccoli.

Nearly two dozen members of the Cascade Two-Cylinder Club (from as far away as Lynden) towed their antique tractors on trailers and flatbeds to the Engle family farm in Coupeville. (Photo by David Welton)

“Every year, we go somewhere,” he says. “We’ve gone to Lopez Island several years in a row … had to get on the ferry. I restore my own tractors. I still have a farm and use some of my John Deeres. It’s a great hobby.”

John Deere, a blacksmith, revolutionized the Midwestern farming world in 1837 by using a broken saw blade to create a self-scouring steel plow that the heavy clay soil of the prairie wouldn’t stick to. He went into production, and the company has since grown to become an international manufacturer of equipment used in agriculture, construction, forestry, and landscaping.

Standing tall in the seat of his antique John Deere tractor, a C2CC member heads slowly through Ebey’s Prairie. (Photo by David Welton)

C2CC member Aldon Boon owns two two-cylinder John Deeres and co-owns a third with his son Zach who owns another on his own. The Boon family ran a dairy and chicken farm in Oak Harbor for years until they sold the property in 1999. Like Bob Engle, Aldon Boon never got tractors out of his blood.

Between them, Zach (front) and Aldon Boon own four John Deere tractors. (Photo by David Welton)

“When we were married in 1979, we milked 300 cows a day,” says Corinne Boon, who married Aldon right after high school. For Aldon’s 50th birthday, she bought him a 1940 John Deere tractor, which he restored to pristine condition. Now, living in the suburbs of Oak Harbor, Aldon, who works for the City of Oak Harbor, keeps his pristine collection housed in sheds and takes them out for club events.

Zach Boon drove one of the tractors as part of the parade, towing an antique wagon on which his wife Miranda and baby daughter Anabeth sat. Corinne rode in the wagon, too, with her good friend Amy Hauser and their pair of smooth collie dogs, who lifted their noses at the scents that rolled by. Along the way, visitors stood on the side of the road and waved at the spectacle.

Miranda and Anabeth Boon ride in an antique John Deere trailer pulled by Zach Boon. Even pacifiers are green and yellow to celebrate the occasion. (Photo by David Welton)

Corinne says that another of their four sons works on a large-scale dairy farm in Arizona, which milks 10,000 cows daily. Ironic, she mused, that big operations, such as the one where her son works, are the ones that put the family farms owned by her parents and the Boons out of business.

Loren Dahl, C2CC vice president, reminisced about the simpler days of easy-to-fix two-cylinder tractors, which he used when he farmed for years in the Skagit Valley raising beef cattle and growing hay. He pulled out his phone and proudly showed photos of old potato harvesters he collected that looked like pole diggers. Then he scrolled to a photo of a red monster machine that his son drives to harvest potatoes all at once and shook his head at how times are changing.

Club vice-president Loren Dahl has one vintage tractor for each of his five acres. (Photo by David Welton)

He jokes that he now has five tractors for his five acres in Bow, but the truth is, he enjoys tinkering with and polishing the old gals. Dahl talked with photographer David Welton, who had recently lusted after a 1947 John Deere Model M, parked beside a barn near the Maxwelton Slough. Welton fantasized about restoring the tractor, which was listed for sale at $1,400. But Dahl warned him that restoration costs would be expensive: “Most people think they will economize by doing the job themselves, but they always learn that it’s easier and cheaper in the long run just to buy the finished product.”

Heib weighed in on the conversation, saying he buys old junker tractors and scavenges their parts to keep his collection of beauties up and running.

After club members drove their tractors in a parade around the Ebey’s Landing Historic Reserve, they gathered for lunch and talked good-naturedly while balancing their paper plates piled high with ham, baked beans, and potato salad. Then they headed out for another tour, this time to the Sunnyside Cemetery, which would have delighted many of the old farmers buried there who once used tractors just like them to till the prairie.