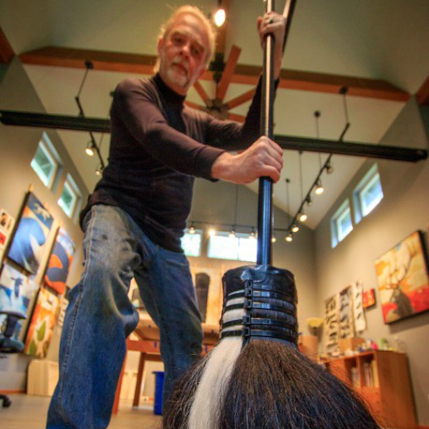 Whidbey painter Craig Kosak’s new show, “The Secret Life of Ravens” will be featured at Brackenwood Gallery for the month of June. It’s the first solo exhibition of his big brush abstracts with the series of bold paintings representing a departure from Kosak’s usual representational style.

Being the first gallery to show this new style was a leap of faith for Brackenwood owner Jason Waskey. Last year, after successful showings of Kosak’s work, Waskey booked a solo exhibition for the artist. Then, a curveball: “Sometime around Christmas, Craig said ‘you know, I’m thinking about tearing it all down and starting from scratch. Really reinventing what I do. Are you still in?’ and I said ‘Yeah, let’s do it.’”

Kosak has been a painter all his life. “I sold my first painting as a senior in high school,” he said. “But I never thought I could make a living at it, so I went into graphic design.” After completing that graphic design career and raising a daughter, he decided to give painting a shot. “I gave myself five years to be successful,” said Kosak. “If it didn’t happen by then, it wasn’t going to happen.”

He did it in two.

Inspired by his travels through national parks, Kosak’s paintings were shown in galleries throughout the American West. Featuring the landscape and the animals of the area (bison, horses, wolves, and Kosak’s personal totem, the raven) the paintings sold very well. But after eight years of success, Kosak felt pulled in a new direction.

“I started to feel like I was doing the same old thing,” said Kosak. “So much of my work has been ‘tight.’ I wanted to cut loose a little bit, to be more expressive. I’ve always wanted my paintings to evoke an emotional response, but trying to do it through subject matter is tricky. Sometimes you hit it, sometimes you don’t. It’s hard.”

Kosak asked himself: “Can I find a more pure way of talking about emotional situations and events?”

A purchase he made in 2010 set things in motion. “I bought a brush from Japan.” Kosak said, then produced an extremely large paintbrush. “It’s the most beautiful thing I own.” The brush is over three feet long and weighs five pounds. With a gleaming lacquered handle and an enormous plume of smooth, pale horsehair, it looks like a gorgeous exclamation point. Deemed “too beautiful to use” by Kosak, it will soon be hung in his home as a piece of decorative art. The brush and its potential set his creativity in motion. “This is what inspired this whole thing.”

The challenges of big brush painting are myriad, and the logistics of making it happen were a challenge for Kosak. He created his own brushes, the largest one being over five feet long and weighing approximately nine pounds. With a brush that large that’s able to hold up to half a gallon of paint at once, Kosak needed to find a brand of paint that was both economical and performed as needed. Months of paint testing and research were required.

The weight of the brushes was also something to be managed, as painting freehand with such large, heavy tools was untenable. Kosak designed and built an overhead support system with beams and pulleys that supports the large brush and allows it to move, slowly yet freely.

Kosak demonstrated his technique with the large brush: “It doesn’t happen fast,” he said. “I have to let the paint run down the brush. Seeing the texture of the stroke is super important to me.” He planted his feet and slowly leaned out, guiding the brush with his hands. It looks meditative, as though he’s doing tai chi.

“The brush does a lot of the work for me,” said Kosak. “I just have to let it go. I’m allowing imperfections to occur. [These paintings] are supposed to feel like life, and life is not a perfect, polished thing. It’s gutsy. I’m trying to make gutsy paintings.”

Kosak at work with his large brush  (photo by David Welton)

This extraordinary setup is housed in Kosak’s studio next to his home in Langley. Having finished his travels around the American West, Kosak decided to turn inward and fulfill a dream of creating his own home and studio. He searched for available land around the greater Puget Sound area. At his first visit to his south Whidbey Island location a raven flew overhead and offered a greeting. This omen seemed auspicious and Kosak purchased the land, naming the property “Ravendell.”

Kosak and his team of builders cleared less than two of the five rural acres of forest to build his “compound.” It includes a 924 square-foot studio and a 1250 square-foot home, where Kosak lives happily with his dog, Tucker.

“When I see the preparation that goes into the work Craig does, it’s satisfying from a craftsmanship standpoint,” said Brackenwood owner Waskey. “He meticulously plans out what the paintings are going to be, knowing that as he paints it becomes something different. I think the work is really special and sort of magical. It’s really brave.”

Kosak acknowledges the fear involved in this process. “One thing I think all creatives go through is fear. It’s scary as hell! Especially if you’re doing the work for a living. I think creativity loves fear.”

“A lot of my work is about courage,” he continued. “You have to be afraid in order to have courage.”

Craig Kosak’s “The Secret Life of Ravens” runs Thursday, June 2 through Wednesday, June 29 at Brackenwood Gallery in Langley, with an artist’s reception from 5 to 7 p.m. on Saturday, June 4. See more details of Kosak’s work and work process at www.craigkosak.com.

Watch Kosak at work in this video:

Leslie Irish Evans is a podcast host, Huffington Post blogger, and the author of “Peeling Mom Off the Ceiling: Reclaiming Your Life From Your Kids.” She lives in Langley, WA. Learn more about her at http://www.leslieirishevans.com.