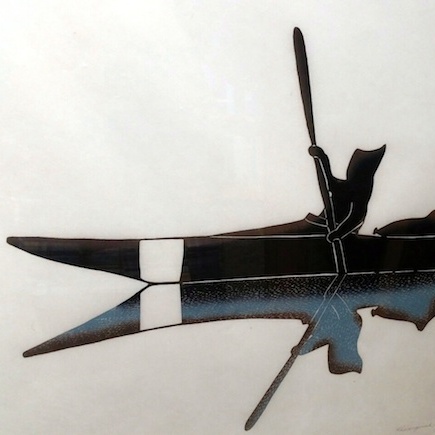 View and Bid on Inuit Art

Thanks to a donation of First Nation limited edition prints to the Freeland Library, you can view and bid on Cape Dorset Inuit art that’s on display this month. The art depicts life and its connection to the Arctic in images of polar bears, walruses, a kayaker, and musk oxen, among others.

Cape Dorset, known as “Kinngait” in the Inuit language, is a tiny island hamlet in the recently-formed Canadian territory of Nunavut, once a part of the Northwest Territories. The indigenous Inuit, whose traceable culture and art dates as far back as 1000 B.C., learned printmaking techniques in the 1950s. A white man, James Huston, encouraged the artists to print multiple images of their drawings using stone carving, lithograph, and stencil techniques. A cooperative workshop formed, and the hamlet developed a reputation as being the “Capital of Inuit Art.”

Former Greenbank residents Bannister and Margaret Farquhar collected 10 signed and numbered prints by various Inuit artists who created their work between 1976 and 2003. When the Farquhar’s health deteriorated, and they relocated to Houston to be closer to family, the couple’s long-time friend and estate executor David Norton donated the prints to the Freeland Library per the Farquhar’s request.

Because the bequest came with no restrictions on the prints’ use, Friends of Freeland Library chose to keep one and auction the other nine pieces as a fundraiser for a project that has not yet been specified.

“Owls are associated with knowledge, and we’re always on the lookout for helping customers use the library,” says Arand. The artist of the work, Kananginak, was instrumental in forming the West Baffin Eskimo Cooperative and was a member of the Royal Canadian Academy. He was one of the original artists whose work was included in the first cataloged collection of Cape Dorset prints in 1959.

Bannister Farquhar and Norton were old friends from Texas who earned their doctorates together in rocket propulsion. Later, Bannister moved to Washington and worked as an engineer with Boeing. His wife Margaret, who earned a doctorate in biology, worked at the University of Washington. The couple moved to Whidbey Island in the 1970s, living first on the south end and later in a home they built in Greenbank. They traveled to Canada and collected art, sometimes with the Nortons.

“Protecting the Herd,” stonecut and stencil by artist Kananginak; “The Lineup,” lithograph by artist Ohotaq. (Photo by Don Wodjenski)

Norton’s wife Connie recalled Whidbey visits. “We’ve all been friends since 1964,” she says. “When Bann and Margaret found their land on Whidbey, they called it a piece of paradise. We visited them once a year. Bann loved to go crabbing with the neighbors. They were wonderful people. When they started having health problems five years ago, they asked David to act as their power of attorney and executor of the estate.”

Art lovers can purchase the prints outright at their assessed value or bid on them for a minimum of 75 percent of their assessment. The library has received several bids and so far, the favorite of patrons is the kayaker print.

To view these works, visit the Freeland library. You can purchase or bid on your favorites by 7 p.m. on Friday, Dec. 2, at which time the Friends of the Freeland Library will celebrate the end of the auction and announce the winners at a soiree. The library is located at 5495 Harbor Avenue in Freeland and is open daily.

Kate Poss worked as a library assistant at the Langley Library until last June. She was thrilled to work for three summers as a chef aboard a small Alaskan tour boat from 2008 to 2010. She was a newspaper reporter in Los Angeles for many years before moving to Whidbey Island where she likes “talking story,’” hiking, hosting salons, and writing her novel.