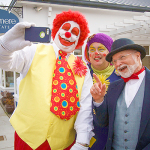 A record number of detectives discover Whidbey for Mystery Weekend

A record number of sleuths participated in the 31st annual Mystery Weekend in Langley Feb. 21-22. The Chamber of Commerce sold just over 1000 tickets for the popular event, as sunny skies beckoned amateur sleuths from all over, including some from out of state and some who have attended Mystery Weekend since it began 31 years ago.

The mystery, written by Loretta Martin, was entitled “It’s No Laughing Murder.” Twenty-six local actors were involved in the production, and 35 Langley businesses handed out numbered clues.

Phyllis Curr Thriller was found dead by her cousin Winnie Burl on the side deck at the Dog House Tavern, which she had recently inherited from her uncle Dog Curr. Winnie Burl, and niece Josephine Curr and nephew Joe Curr, were not mentioned in the will.
Thriller had planned to reopen the Dog House as a comedy club with ties to a reality TV show, news which was exciting to the townspeople, city officials and a number of local comedians and clowns who wanted a shot at fame.

Coroner Gus Gruesome reported that Thriller had puncture wounds to her hand and that the contents of her purse were strewn about near her body. Missing from the purse was a check for $5000, a gift of startup money for the Comedy Club from clown Donald McConald.

(Spoiler alert) At the “reveal” on Sunday afternoon at Langley Middle School, veteran detective I.B. Fuzz explained her deductions and pointed the finger of blame at Thriller’s jealous cousin Winnie Burl, who was then “arrested” by Langley Police and carted off to jail.

After the reveal, a drawing was held for prizes donated by local merchants and innkeepers.

Volunteer Marilyn Esterly keeps up with the crowd at the Langley Chamber of Commerce office.

Annie Horton plays Joan Shivers and gets some smiles.

J. Scott Williams, playing the part of Charlie Clapman, stands in front of the historic Dog House Tavern with a pocket full of clues.

Shayne Thomas is Ferd Degree, the “Talent Scout for the Stars” provides some clues throughout the weekend.

Ferd takes a moment to appreciate the view with the Boy and a Dog sculpture by local sculptor Georgia Gerber.

Daryl B. Mortacome, aka David Holte, plays a 49er with a sense of humor.

Daryl B. Mortacome, played by David Holte, and Fred O’Neal (left) get the visitors involved. You never know when you’re going to need a good knot on Mystery Weekend!

Vistors and locals line up for clues at the Dog House Tavern.

W.C. Shields with his white gloves is played by Wayne Furber.

All smiles and no raincoats for Mystery Weekend 2015.

Ben Stafford, Kirt Herrman with the pith helmet, Baylor Blair, and Leif Jorgensen came from Snohomish dressed and ready to solve the mystery.

Attendees soaked up the February sunshine and the clues as they get closer to solving the crime.

The Langley Police cart Winnie Burl (Trevor Arnold), who killed her cousin, off to jail.

Find out more about what goes on during Mystery Weekend by reading this Feature from last week by Betty Freeman.